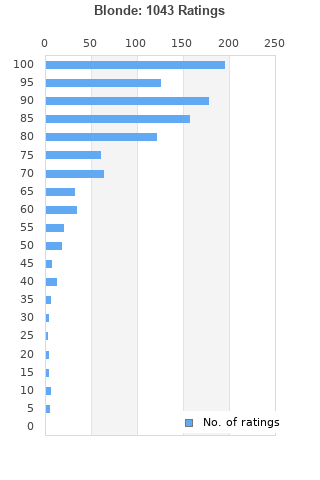 Frank Ocean Blond XL Recordings US vinyl 2 LP
Time left: 20h 55m 34s
Ships to: Worldwide
$2,499.99
Go to store
Product prices and availability are accurate as of the date indicated and are subject to change. Any price and availability information displayed on the linked website at the time of purchase will apply to the purchase of this product.  See full search results on eBay

Blonde is ranked as the best album by Frank Ocean. 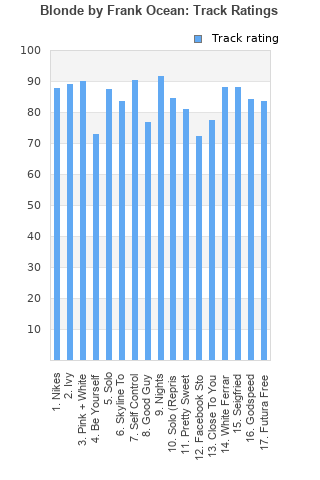 Rating metrics: Outliers can be removed when calculating a mean average to dampen the effects of ratings outside the normal distribution. This figure is provided as the trimmed mean. A high standard deviation can be legitimate, but can sometimes indicate 'gaming' is occurring. Consider a simplified example* of an item receiving ratings of 100, 50, & 0. The mean average rating would be 50. However, ratings of 55, 50 & 45 could also result in the same average. The second average might be more trusted because there is more consensus around a particular rating (a lower deviation).
(*In practice, some albums can have several thousand ratings)
This album is rated in the top 1% of all albums on BestEverAlbums.com. This album has a Bayesian average rating of 84.0/100, a mean average of 82.9/100, and a trimmed mean (excluding outliers) of 84.1/100. The standard deviation for this album is 16.3.

This causes a stendhal syndrome for music...

minimalistic yet complex at the same time. a timeless classic.

The ideas and the writing behind blonde are rather beautiful. Lyrics invoke everything from Norse heroes to lean recipes in Texas while describing love, sadness, and nostalgia. The production on the other hand just never finds success. The pitch up vocals sound wonky and pull you from the emotion of the songs. The bland almost ambient mixing drones on and on through the album. I do think the second half makes a little bit of a comeback with "White Ferrari","Siegfried", and "Godspeed" but that's not enough in a 17 track album.

Seeing that Pitchfork put it on top of their 2010s list, I wondered whether they were hearing something I wasn't. Hearing it again, I can say it certainly does something different than Channel Orange, but not necessarily something superior. The most impressive thing I hear is the '90s IDM ('Night''s instrumental could be on a lost Selected Ambient Tracks III) and '00s indie psychedelia influence (okay, I can hear some '60s psychedelia influence too), and how he doesn't make it sound like he just jams it in to appear interesting; Frank is real, but we knew that already.

The biggest issue I have with this album is how it has great (fucking great) ideas, but places them at such awful moments or only in the background noise, which makes the whole sound rather theatrical. They're used as plot devices rather than as ways to improve the listening experience (even though they would). Which is exactly the shit that the smug hipsters at Pitchfork love: Great ideas executed poorly or with insufficient commitment so they can be the heroes who bring the misunderstood genius to the foreground, while the reason why it isn't on the foreground is simply that it is poorly executed. And when I say "executed poorly" I mean those great little ideas I was talking about; the simple things like singing perfectly soulful and making catchy, perfectly produced loops (I cannot call them beats right?) he executes perfectly. And those are the things you enjoy the most from this album, not the "experimental" tinges it has, that's just justification you need to call it a masterpiece, rather than saying "it's just good". I love 'Nikes' because it makes me feel sadness in the same way Ray Charles' soul from the '50s did. Does the fact he pitched and used every effect in the studio on his vocals add anything?... Okay yes, but does it change everything? No. It's still just a soul song, and a fucking great one and there's nothing wrong with that. No reason to praise it to the heavens, no need to stomp it into the ground.

Criticizing this album is extremely difficult, which is often misunderstood as proof for quality (it just hints at quality).

One of the most overrated albums I’ve ever heard. Channel Orange is SO much better than this. This album is just plain boring and disappointing.

Frank Ocean's Blonde is my favorite album of the 2010s. It's extremely personal and emotional, using concept structures to deliver dreamlike songs, reflecting on nostalgia and the current state of romance in the world. I think Self Control is one of the best songs ever written. The album is stunning to listen to beginning to end, often feeling meditative and hypnotic.

Your feedback for Blonde