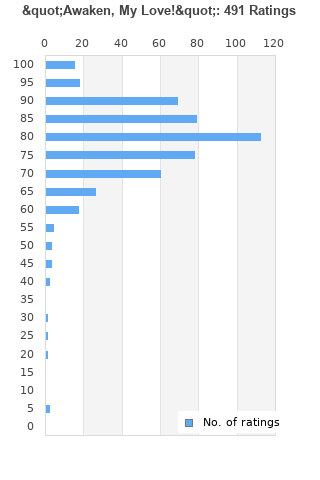 "Awaken, My Love!" is ranked as the best album by Childish Gambino. 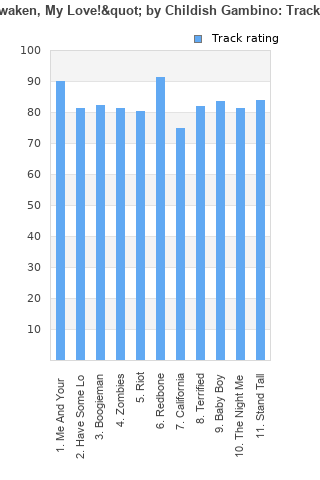 Rating metrics: Outliers can be removed when calculating a mean average to dampen the effects of ratings outside the normal distribution. This figure is provided as the trimmed mean. A high standard deviation can be legitimate, but can sometimes indicate 'gaming' is occurring. Consider a simplified example* of an item receiving ratings of 100, 50, & 0. The mean average rating would be 50. However, ratings of 55, 50 & 45 could also result in the same average. The second average might be more trusted because there is more consensus around a particular rating (a lower deviation).
(*In practice, some albums can have several thousand ratings)
This album is rated in the top 2% of all albums on BestEverAlbums.com. This album has a Bayesian average rating of 79.0/100, a mean average of 78.4/100, and a trimmed mean (excluding outliers) of 79.2/100. The standard deviation for this album is 12.3.

This artistic exploration is so fun to see from Childish Gambino. These songs are infectious and fun, but also give us a deeper look into himself as an artist. While it's pretty consistent and one-note with the funk elements, it's still done in a way that is easily enjoyable.

Love the album. Very relaxed. I adore the track "have some love', very underrated. Not a bad song on this album.

The best George Clinton album in a few decades! Wait, no...

Seriously though, this is a great album. I still haven't fallen in love with every track, but the variety and yet consistency of quality here is amazing. I love "Have Some Love", which is definitely just a Parliament/Funkadelic song, but its a damn good one. "Boogieman" is a Curtis Mayfield song, but again its a damn good one. Redbone is impossible not to enjoy. And the surprising highlight of the whole affair for me has to be California. I've seen it get some hate other places but I really enjoy it. Sometimes it gets too unfocused, but its a solid solid album. The best funk I've heard made in a long long time, though I must admit its not my area of expertise.

A somewhat diferent Gambino here and really surprising. Although as an album "Awaken, My Love!" doesn't acomplish much.

Childish Gambino wears his influences on his sleeve on this album. He hasn't been shy about saying how much "Maggot Brain" influenced him and it shows here. I don't think it's a problem for most of the album but "Have Some Love" is basically a Funkadelic ripoff. There are some more borrowed riffs and things like that on other songs but that is definitely the most overtly copied. Other than that, I really enjoyed the album. Gambino has reached a new height that I didn't see him getting to with his rapping. There's so much creativity on songs like "Me and Your Mama" and "Riot!" and he shows just how talented he is on "Redbone" and "Stand Tall". I'm very pleased with this album and the new direction that Gambino is headed in.

A funk album from mr. Glover. I’m not mad at this. He successfully put an old genre in a new jacket by not just making a funk song like they would in the ‘70s and just add auto-tune, but really giving auto-tune - and other modern vocal effects - an original place in funk (as an example).

“Just a half as (sic) rip of (sic) on (sic) some old Funkadelic album”? Nah. Your only problem is the overhypedness (not a word). I agree, but “don’t shoot the message”. Despite that it’s still a fucking good album.

This is one of my favorite albums of the decade so far. Who would've thought Childish Gambino would jump from Rap to R&B/Funk, or that he'd make his greatest album in doing so. Everything Donald Glover does just amazes me. I'm excited to see what his final album looks like, personally I hope it's more like this than his older stuff.

Your feedback for "Awaken, My Love!"