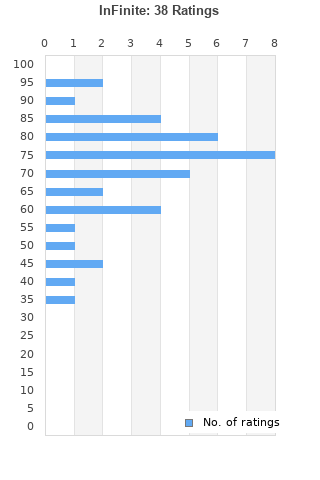 Deep Purple-Infinite - Cd+Dvd (UK IMPORT) CD NEW
Condition: Brand New
Time left: 17h 44m 29s
Ships to: Worldwide
$14.13
Go to store
Product prices and availability are accurate as of the date indicated and are subject to change. Any price and availability information displayed on the linked website at the time of purchase will apply to the purchase of this product.  See full search results on eBay

InFinite is ranked 15th best out of 57 albums by Deep Purple on BestEverAlbums.com.

The best album by Deep Purple is Machine Head which is ranked number 263 in the list of all-time albums with a total rank score of 7,519. 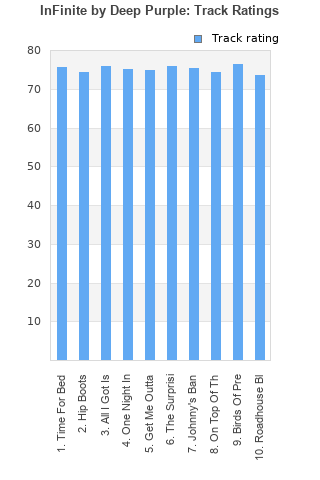 Rating metrics: Outliers can be removed when calculating a mean average to dampen the effects of ratings outside the normal distribution. This figure is provided as the trimmed mean. A high standard deviation can be legitimate, but can sometimes indicate 'gaming' is occurring. Consider a simplified example* of an item receiving ratings of 100, 50, & 0. The mean average rating would be 50. However, ratings of 55, 50 & 45 could also result in the same average. The second average might be more trusted because there is more consensus around a particular rating (a lower deviation).
(*In practice, some albums can have several thousand ratings)
This album has a mean average rating of 71.0/100. The trimmed mean (excluding outliers) is 70.8/100. The standard deviation for this album is 15.2.

Awesome album full of energy and classic Deep Purple feel. Sadly, it's probably their last (but not least) album...
My favourite tracks are The Surprising, All I Got is You and Time for Bedlam.

Having listened to the whole of the first track at the wrong speed (I wish artists would make it obvious on the cover or vinyl label if they bring an album out 45rpm!) which wasn't that obvious as Ian Gillan's voice is heavily processed on the first track. So haven taken off the platter and switched the drive belt to the other cog, I sat down again to listen to the first Deep Purple I have bought since Stormbringer. By the time I had flipped the vinyl to side B (which wasn't long) I realised that I was really getting into it. The Hammond mastery by Don Airey and driving drums provided by Ian Paice is very Deep Purple. Steve Morse is an amazing guitarist and blends perfectly with the rhythm section which is completed by Roger Glover. Ian Gillan seems to have re-discovered his vocal talents which I felt he lost on some of his later solo works. 'The Surprising' is excellent track with a very proggy feel which I personally like. 'Roadhouse Blues is superb with a Jools Hollandesque piano' complimented with great blues harmonica. An album which will definitely grow on me.

Your feedback for InFinite