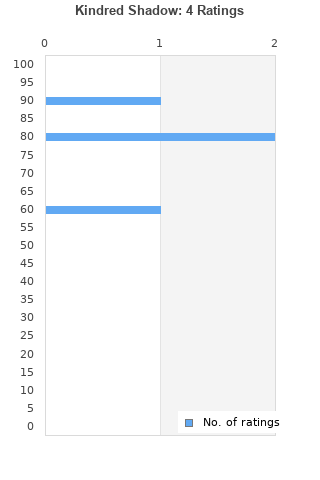 Kindred Shadow is ranked 2nd best out of 3 albums by Pogo on BestEverAlbums.com.

The best album by Pogo is Weightless which is ranked number 89542 in the list of all-time albums with a total rank score of 2.

No tracks have been rated on this album yet.
#
Track
Rating/Comments
1.
Sky Heart
Rating: Not enough dataComments:

0
3.
No Worries
Rating: Not enough dataComments:

0
4.
The Trouble
Rating: Not enough dataComments:

0
7.
Where Is Ethan?
Rating: Not enough dataComments:

0
10.
Her Perfume
Rating: Not enough dataComments:

The great, highly unique concept of structuring song vocals solely out of vocal samples from movies is a special idea that proves in practice to have limited use (in the sense that this 36-minute album wears out its welcome before it's halfway over).

Your feedback for Kindred Shadow