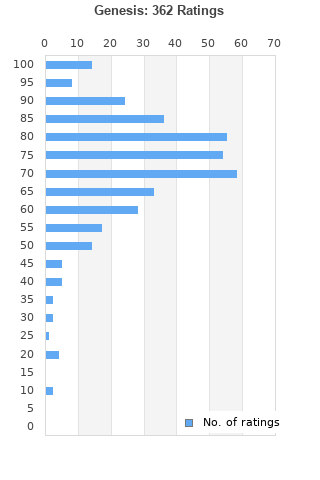 FREE US SHIP. on ANY 3+ CDs! USED,MINT CD Generation J: Secret Place
Condition: Like New
Time left: 3m 1s
Ships to: Worldwide
$20.00
Go to store
Product prices and availability are accurate as of the date indicated and are subject to change. Any price and availability information displayed on the linked website at the time of purchase will apply to the purchase of this product.  See full search results on eBay

Genesis is ranked 9th best out of 29 albums by Genesis on BestEverAlbums.com.

The best album by Genesis is Selling England By The Pound which is ranked number 136 in the list of all-time albums with a total rank score of 13,289. 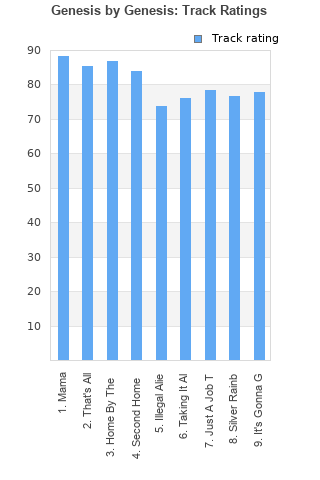 Rating metrics: Outliers can be removed when calculating a mean average to dampen the effects of ratings outside the normal distribution. This figure is provided as the trimmed mean. A high standard deviation can be legitimate, but can sometimes indicate 'gaming' is occurring. Consider a simplified example* of an item receiving ratings of 100, 50, & 0. The mean average rating would be 50. However, ratings of 55, 50 & 45 could also result in the same average. The second average might be more trusted because there is more consensus around a particular rating (a lower deviation).
(*In practice, some albums can have several thousand ratings)
This album has a Bayesian average rating of 72.3/100, a mean average of 71.4/100, and a trimmed mean (excluding outliers) of 72.3/100. The standard deviation for this album is 15.7.

A very top-heavy Genesis album, as the first side features songs like Mama, That's All, and Home by the Sea, which are some of the best of the band's three-piece era. The second never comes close to reaching those highs, though there are a couple decent pop tracks scattered throughout it. You can tell that Collins' was really coming into his own as a singer, as, in terms of vocals, this may be his best album with Genesis. The instrumentation is mostly solid all throughout, though it becomes a little too cheesy in parts, and the lyrics probably aren't quite up to previous Genesis standards. I'd say this album is pretty much on par with the previous record Abacab, though the highs here are certainly higher. Definitely worth your time to check out the first half of this one, maybe give the second half a listen or two if you're feeling adventurous.

My problem with this album is Genesis attempting to please the masses and maintain their loyal prog fan base. Side 1 works - Mama, That's All, Home by the Sea does a fine job of walking this tightrope of styles, Side 2 fails. By the time I finish with side 1 I usually don't waste time listening to the rest of the album. BTW -- Illegal Alien makes me cringe in light of today's politically correct society, but even then it was bordering on insulting, and that's coming from someone who thinks we have become too politically correct.

The trouble with this album is that the first side is fantastic (among the best stuff they did in their pop-phase) while the second half is at it's best passable and at it's worst hard to listen to. Silver Rainbow really is every bit as bad as it sounds. You got everything you want on the first half: a dark and atmospheric, still incredibly memorable opnener in 'Mama', a well made pop song in 'That's All' and an incredible prog-suite in the 'Home by the Sea's. Best thing you got on the second side is Just a Job to Do, an above average pop-song.

I really dislike Genesis and it is an easy flip to another station, but there are some solid tracks on this album. It is pop rock for the masses and I am usually out on that.

A bit inconsistent. As usual at this time, the singles were always the stronger cuts. Mama, that's all, and, illegal alien, are arguably the three best songs here. By this time Genesis were a completely different band to the Gabriel era, and with each release sound more like a Phil Collins solo album. Hit and miss.

Until the final two tracks, this is a surprisingly consistent effort by Genesis, with a little bit to offer to everyone. "That's All" is a deceptively sublime pop song; I don't think I've ever flipped stations when I came across it on the radio. "Just A Job To Do", "Home By The Sea", "Illegal Alien", "Mama"? Solid craftsmanship all around.

'Mama' one of their best tracks not a bad album, definitely eighties (without knowing)Home By The Sea trying to stay in touch with older style, That's All a typical Collins tune.

Your feedback for Genesis