Post Malone - beerbongs & bentleys 2LP Vinyl (RARE Exclusive Yellow Vinyl)
Condition: New
Time left: 20h 34m 3s
Ships to: Worldwide
$249.99
Go to store
Product prices and availability are accurate as of the date indicated and are subject to change. Any price and availability information displayed on the linked website at the time of purchase will apply to the purchase of this product.  See full search results on eBay

Beerbongs & Bentleys is ranked 2nd best out of 4 albums by Post Malone on BestEverAlbums.com.

The best album by Post Malone is Stoney which is ranked number 20658 in the list of all-time albums with a total rank score of 44. 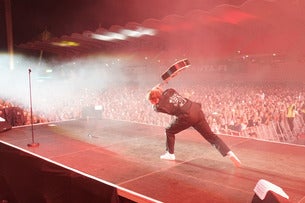 Rating metrics: Outliers can be removed when calculating a mean average to dampen the effects of ratings outside the normal distribution. This figure is provided as the trimmed mean. A high standard deviation can be legitimate, but can sometimes indicate 'gaming' is occurring. Consider a simplified example* of an item receiving ratings of 100, 50, & 0. The mean average rating would be 50. However, ratings of 55, 50 & 45 could also result in the same average. The second average might be more trusted because there is more consensus around a particular rating (a lower deviation).
(*In practice, some albums can have several thousand ratings)
This album has a Bayesian average rating of 62.4/100, a mean average of 60.2/100, and a trimmed mean (excluding outliers) of 61.0/100. The standard deviation for this album is 17.7.

Better than other hip-hop albums, but nothing special.

A pleasant surprise coming from Post. Criminally underrated, catchy, and with good performances, this is the best pop album of the year so far.

Stay is awesome, I will skip the rest of the album.

Surprisingly pleasant experience listening to this all the way through. Yes it is built on trendy sounds and is very surface level, but almost all of the tracks contain a decent to good vocal melody.

A little confused why this was delayed for so long since its original release. It's pretty bad. For starters, I don't listen to lyrics when it comes to this kind of music, its feel good music for college parties / get togethers. I understand that. However, with that said there are wayyyy more artistic ways to go about this type of music. Just look at Travi$ Scott's "Rodeo" as an example. This thing just lacks creativity. Most of the songs suck outside of the ones he released already as singles, and its super inflated for no apparent reason outside of trying to get more money through streams. I love plenty of trap and pop rappers, but I prefer Post more as an internet personality than I do a musician. I would have given it a 4/10 because I do like some songs, but since he made fans wait a year longer than the original release date and yet still inflated this thing with a bunch of boring filler tracks...

Your feedback for Beerbongs & Bentleys