All Will Be Revealed (studio album) by Diamond Head 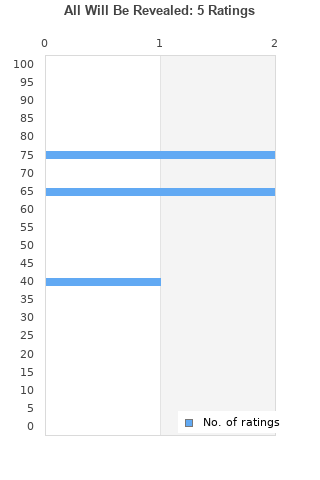 DIAMOND HEAD-ALL WILL BE REVEALED (UK IMPORT) CD NEW
Condition: Brand New
Time left: 5d 8h 29m 9s
Ships to: Worldwide
$11.15
Go to store
Product prices and availability are accurate as of the date indicated and are subject to change. Any price and availability information displayed on the linked website at the time of purchase will apply to the purchase of this product.  See full search results on eBay

All Will Be Revealed is ranked 5th best out of 9 albums by Diamond Head on BestEverAlbums.com.

The best album by Diamond Head is Lightning To The Nations which is ranked number 5806 in the list of all-time albums with a total rank score of 219.

No tracks have been rated on this album yet.
#
Track
Rating/Comments
1.
Mine All Mine
Rating: Not enough dataComments:

0
2.
Give It To Me
Rating: Not enough dataComments:

0
8.
All Will Be Revealed
Rating: Not enough dataComments:

All Will Be Revealed rankings

All Will Be Revealed collection

All Will Be Revealed ratings

All Will Be Revealed favourites

All Will Be Revealed comments

I bought this as a red vinyl re-issue not really knowing what it would sound like. It's a good metal album, not fantastic, not setting the world alight but ok. It's one of those albums that when it was playing in the background, I was doing something else (was updating the photo library on my phone) and when it finished playing, I couldn't really recall much about it, in fact if someone said to me, hum any track, I wouldn't have been able to. Probably need to listen to it some more...

Your feedback for All Will Be Revealed