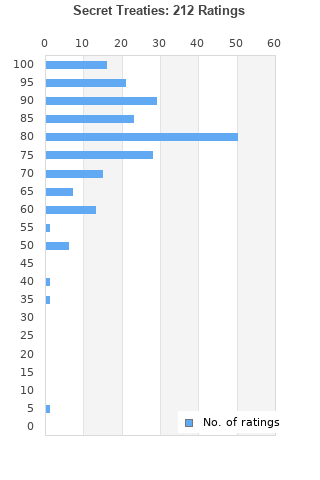 Blue Oyster Cult - Secret Treaties CD
Condition: Very Good
Time left: 19h 14m 11s
Ships to: Worldwide
$9.99
Go to store
Product prices and availability are accurate as of the date indicated and are subject to change. Any price and availability information displayed on the linked website at the time of purchase will apply to the purchase of this product.  See full search results on eBay

Secret Treaties is ranked as the best album by Blue Öyster Cult. 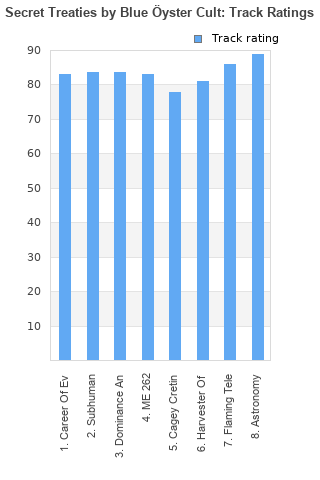 Rating metrics: Outliers can be removed when calculating a mean average to dampen the effects of ratings outside the normal distribution. This figure is provided as the trimmed mean. A high standard deviation can be legitimate, but can sometimes indicate 'gaming' is occurring. Consider a simplified example* of an item receiving ratings of 100, 50, & 0. The mean average rating would be 50. However, ratings of 55, 50 & 45 could also result in the same average. The second average might be more trusted because there is more consensus around a particular rating (a lower deviation).
(*In practice, some albums can have several thousand ratings)
This album is rated in the top 2% of all albums on BestEverAlbums.com. This album has a mean average rating of 80.0/100. The trimmed mean (excluding outliers) is 80.6/100. The standard deviation for this album is 13.9.

Great rock tunes with a bit of added uniqueness and experimentation. Nothing outstanding, but it could grow on me in time.

This is where it all comes together for BOC. There is not a bad song on here and really this might be their best collection of songs. The one drawback I have, as with the first two BOC albums, is a production that sounds dated and weak as it ages. If this had the production of Spectres with these songs it would be the best album ever.

Lots of good, dark fun on this album. By this time BOC had fully evolved, but not yet gone commercial, and the result is quite possibly the best album in their catalog.

Whatever else you say about this album...it's definitely unique. The lyrical content has a certain sense of of humor and the music is certainly different from most of the heavy arena rock bands of the day. It's a bit corny at times, but it definitely gets points for originality.

Your feedback for Secret Treaties