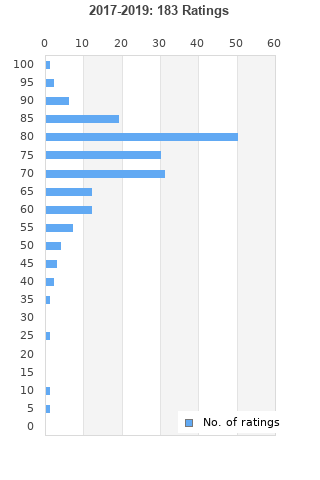 Against All Logic-2017-2019 (UK IMPORT) VINYL NEW
Condition: New
Time left: 29d 1h 52m 32s
Ships to: Worldwide
$47.34
Go to store
Product prices and availability are accurate as of the date indicated and are subject to change. Any price and availability information displayed on the linked website at the time of purchase will apply to the purchase of this product.  See full search results on eBay 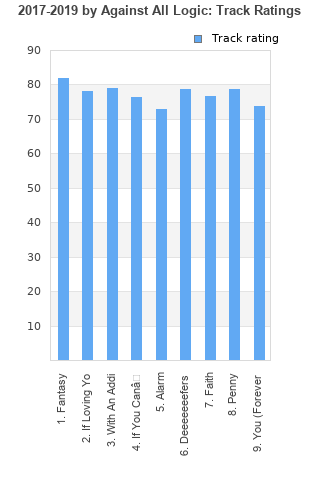 Rating metrics: Outliers can be removed when calculating a mean average to dampen the effects of ratings outside the normal distribution. This figure is provided as the trimmed mean. A high standard deviation can be legitimate, but can sometimes indicate 'gaming' is occurring. Consider a simplified example* of an item receiving ratings of 100, 50, & 0. The mean average rating would be 50. However, ratings of 55, 50 & 45 could also result in the same average. The second average might be more trusted because there is more consensus around a particular rating (a lower deviation).
(*In practice, some albums can have several thousand ratings)
This album is rated in the top 25% of all albums on BestEverAlbums.com. This album has a mean average rating of 73.0/100. The trimmed mean (excluding outliers) is 74.6/100. The standard deviation for this album is 12.3.

I'm not the biggest fan of strictly electronic music but there are some songs that I found compelling. Most of the songs are dense and take some time to get to know.

One of the most interesting and exciting house albums of all time. This is my highest rated album since 2016. I would expect this to remain my 2020 AOTY unless a 10 drops this year (Kendrick maybe?). It's definitely not as accessible as 2012-2017, which maybe that's a good thing since A.A.L had a stigma of being house for people who aren't into house.

Not as good as the first one, and really top-heavy, but still awesome.

Pretty listenable. Nothing that shook me.

Just as good if not better than 2012-2017. Fantasy, Penny, and With an Addict are the standouts but there isn't a single bad track on here.

Wow, this blew me away. Definitely my kind of music. Really enjoyed it.