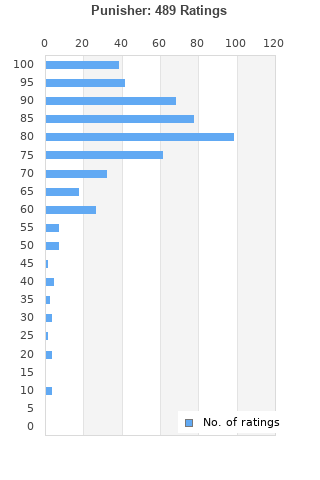 Phoebe Bridgers - Punisher - Limited Red Swirl Vinyl - New & Sealed
Condition: New
Time left: 15h 37m 34s
Ships to: Worldwide
$39.99
Go to store
Product prices and availability are accurate as of the date indicated and are subject to change. Any price and availability information displayed on the linked website at the time of purchase will apply to the purchase of this product.  See full search results on eBay

Punisher is ranked 2nd best out of 2 albums by Phoebe Bridgers on BestEverAlbums.com.

The best album by Phoebe Bridgers is Stranger In The Alps which is ranked number 1832 in the list of all-time albums with a total rank score of 924. 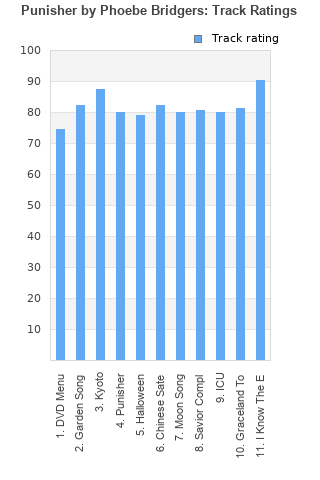 Rating metrics: Outliers can be removed when calculating a mean average to dampen the effects of ratings outside the normal distribution. This figure is provided as the trimmed mean. A high standard deviation can be legitimate, but can sometimes indicate 'gaming' is occurring. Consider a simplified example* of an item receiving ratings of 100, 50, & 0. The mean average rating would be 50. However, ratings of 55, 50 & 45 could also result in the same average. The second average might be more trusted because there is more consensus around a particular rating (a lower deviation).
(*In practice, some albums can have several thousand ratings)
This album is rated in the top 2% of all albums on BestEverAlbums.com. This album has a mean average rating of 79.0/100. The trimmed mean (excluding outliers) is 80.8/100. The standard deviation for this album is 14.3.

Stranger in the Alps is a good album that lost a bit of luster as time went on. But here, Phoebe Bridgers builds upon her ability to sell unfettered melancholy with a believability that is hard to pull off. The added dimensionality in her sound, with a deepened mood and wider instrumental palette, Bridgers takes all the best parts of her debut, and amplifies them.

No bad is song and the album ends with a banger!

Really enjoyed this. There are some incredibly delicate moments and, every so often, she hits upon a truly beautiful melody.

Another incredible album from Phoebe Bridgers. This time around she explores themes of haunted growth, and reflecting on the hurt that has made her who she is. The way the album lyrically pulls together and climaxes on I Know The End is incredibly powerful. Her lyrics are also just so smart, she blows me away.