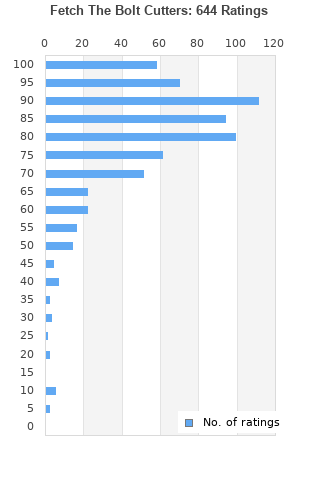 Fiona Apple Bundle Tidal Idler Wheel When The Pawn Fetch The Bolt Cutters Gold
Condition: New
Time left: 2d 3h 26m 42s
Ships to: Worldwide
$189.99
Go to store
Product prices and availability are accurate as of the date indicated and are subject to change. Any price and availability information displayed on the linked website at the time of purchase will apply to the purchase of this product.  See full search results on eBay

Fetch The Bolt Cutters is ranked 5th best out of 5 albums by Fiona Apple on BestEverAlbums.com.

The best album by Fiona Apple is The Idler Wheel Is Wiser Than The Driver Of The Screw And Whipping Cords Will Serve You More Than Ropes Will Ever Do which is ranked number 326 in the list of all-time albums with a total rank score of 6,092. 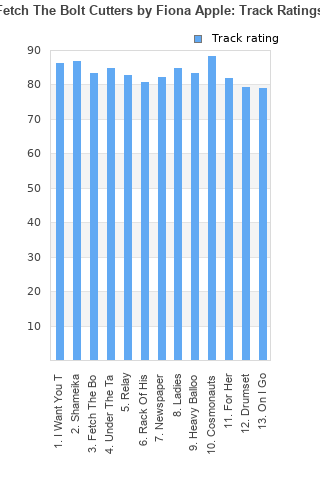 Rating metrics: Outliers can be removed when calculating a mean average to dampen the effects of ratings outside the normal distribution. This figure is provided as the trimmed mean. A high standard deviation can be legitimate, but can sometimes indicate 'gaming' is occurring. Consider a simplified example* of an item receiving ratings of 100, 50, & 0. The mean average rating would be 50. However, ratings of 55, 50 & 45 could also result in the same average. The second average might be more trusted because there is more consensus around a particular rating (a lower deviation).
(*In practice, some albums can have several thousand ratings)
This album is rated in the top 1% of all albums on BestEverAlbums.com. This album has a mean average rating of 83.0/100. The trimmed mean (excluding outliers) is 84.5/100. The standard deviation for this album is 16.2.

To much of a circus. Her earlier stuff was not this overproduced and cliché like. I can't explain it more than that I se clowns falling and ballerinas tip toe dancing, all in black and white, listening to this. I really would have loved to both like it and praise it. The world feels fake without great music!

I've had this album for over a month now, as to me it is only fair to give a rating once I'd played it more than a few times, and I've certainly done that. It took a while to appreciate, but this is a truly fantastic album. Many are mentioning the percussion and the lyrics, but for me it's the harmonies that propel it into genius. And I'm not just talking about For Her and the other harmony based songs, I'm talking about Newspaper, Heavy Balloon and Cosmonauts, amongst others were the harmonies keep building, pushing the songs forward. Another area I appear differ to others is I beleive the 2nd half is stronger. The 1-3 of Newspaper, Ladies and Heavy Balloon is for me as good as Exit Music, Let Down and Karma Police. A truly stunning album.

It is rough, bulky and sparingly arranged. But it is so incredibly interesting, lyrical and concise. It is a listening pleasure and almost brilliant.

I think is a good chance that this album will remain the top album of the year. Very solid tracks, sounds like Bjork in the good days.

All in all a good album. But it didn't catch my heart. There is no specific highlight for me. It's a cool experience to hear the whole album, and of course it is an interesting album.

Took me a few listens to know what was going on here. Overall it's a very admirable effort. The use of percussive elements is quite freeing and a breath of fresh air from increasingly synthetic production efforts that we typically hear. Love the jazzier side of the first three tracks, though this seems to get lost later in the record, regrettably. I enjoy the primal side of "Relay" and the cutely creepy "Rack of His". And "Ladies" has a nice anthemic tone to it. That said, I think the album leans a little "pop" for my tastes- all the stranger considering all the unusual instrumentation and song progressions here, but there are still comparisons to Adele or even Lady Gaga that could be made. The vocal delivery is still quite normal (when sung) on the whole, even if intense at times. Also it is somewhat taxing to work one's way through this work due to a certain lack of melody, especially on "Newspaper" (easily my least favorite here) but on the whole too, the melodies are subtle and obscured by the "sing-speech" on top of them. And then there are songs like "Under the Table", both a blessing and a curse in that, yes, the song is very well-constructed and fairly genius, but still, wow it is annoying to have the chorus of this one stuck in your head. So, to conclude, this is a very worthy effort and I am happy it is getting a lot of love; that said, I find myself preferring to listen to other things most of the time.

AOTY at this time. I understand Pitchfork giving it a perfect 10, the lyrics are incredibles.

Your feedback for Fetch The Bolt Cutters