The Wall (album) by Pink Floyd 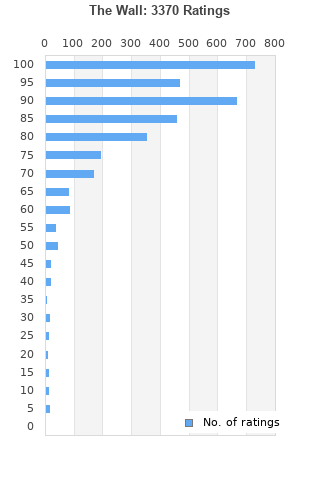 The Wall is ranked 3rd best out of 33 albums by Pink Floyd on BestEverAlbums.com.

The best album by Pink Floyd is The Dark Side Of The Moon which is ranked number 2 in the list of all-time albums with a total rank score of 98,129. 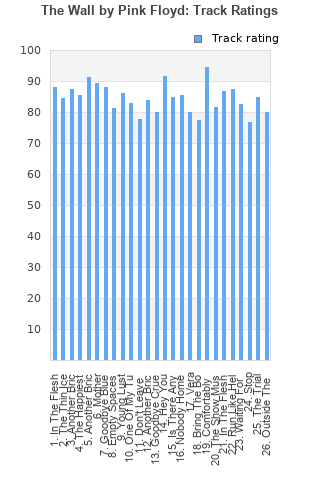 Rating metrics: Outliers can be removed when calculating a mean average to dampen the effects of ratings outside the normal distribution. This figure is provided as the trimmed mean. A high standard deviation can be legitimate, but can sometimes indicate 'gaming' is occurring. Consider a simplified example* of an item receiving ratings of 100, 50, & 0. The mean average rating would be 50. However, ratings of 55, 50 & 45 could also result in the same average. The second average might be more trusted because there is more consensus around a particular rating (a lower deviation).
(*In practice, some albums can have several thousand ratings)
This album is rated in the top 1% of all albums on BestEverAlbums.com. This album has a mean average rating of 85.0/100. The trimmed mean (excluding outliers) is 86.5/100. The standard deviation for this album is 16.2.

A sprawling, frustrated epic with some beautiful moments. Just a shame David Gilmour didn't sing on most of it.

Such an incredible album, the journey from beginning to end has affected me in ways I can’t really explain. Best songs Mother, In the Flesh?, Hey You and of course Comfortably Numb. As Chris said, my musical puberty.

Great Album I like very much Another Brick In The Wall. But the album is a whole art piece and is a good work from Pink Floyd

A piece of art

One of the best albums ever. and there is no filler,
contrary to what some ppl claim. I became a major
PF fan after listening to this.

Another Brick In The Wall Part 2
Comfortably Numb
Hey You
Mother
In The Flesh?
Goodbye Blue Sky
In The Flesh
Young Lust
The Happiest Days Of Our Lives
The Trial
Waiting For The Worms

This album was my musical puberty. I remember being introduced to it because it got frequent airplay on a classic rock station my family listened to, only really hearing songs like Another Brick or Hey You or Comfortably Numb, and didn't really think much about what it all meant but instead just thought they were cool songs. Then I was introduced to the movie and started to think about everything that was really being written about and conveyed. One of the first albums that really made me think about the lyrics in depth. It's a haunting achievement that I'll never stop listening to.

it's unreal how they managed to pull this off as successfully as they did. yeah it's perfect somehow. 10/10

If you get rid of the repeated segments and all that waiting time that we're used to from Pink Floyd (I get it, I don't get it), this won't be a double album anymore. What's left is a single album with some pretty good songs... all overproduced and inconsistent as hell, but on a songwriting level, very good songs. And that's what they're best at in the end, that's what all of you guys are actually enjoying, all that other pretentious bullshit is just reasons to justify your excessive love for them.

Your feedback for The Wall