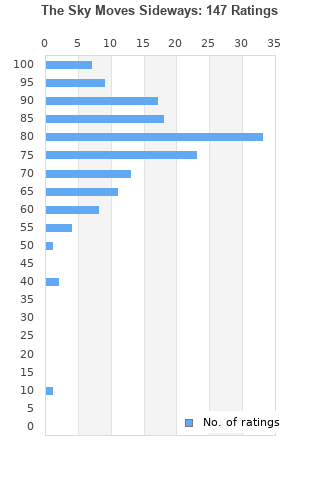 Porcupine Tree The Sky Moves Sideways Rare Blue Vinyl 1995 + Poster Mint
Condition: Used
Time left: 11h 13m 49s
Ships to: Worldwide
£90.00
Go to store
Product prices and availability are accurate as of the date indicated and are subject to change. Any price and availability information displayed on the linked website at the time of purchase will apply to the purchase of this product.  See full search results on eBay

The Sky Moves Sideways is ranked 7th best out of 31 albums by Porcupine Tree on BestEverAlbums.com.

The best album by Porcupine Tree is Fear Of A Blank Planet which is ranked number 433 in the list of all-time albums with a total rank score of 4,487. 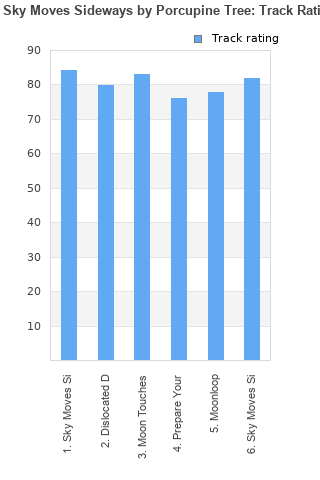 Rating metrics: Outliers can be removed when calculating a mean average to dampen the effects of ratings outside the normal distribution. This figure is provided as the trimmed mean. A high standard deviation can be legitimate, but can sometimes indicate 'gaming' is occurring. Consider a simplified example* of an item receiving ratings of 100, 50, & 0. The mean average rating would be 50. However, ratings of 55, 50 & 45 could also result in the same average. The second average might be more trusted because there is more consensus around a particular rating (a lower deviation).
(*In practice, some albums can have several thousand ratings)
This album is rated in the top 3% of all albums on BestEverAlbums.com. This album has a mean average rating of 78.0/100. The trimmed mean (excluding outliers) is 78.8/100. The standard deviation for this album is 11.9.

The US release is my favourite version of this album. TSMS (Phase One) -> Stars Die -> Moonloop is just such a perfect way to open the record that I don't think I could listen to it any other way.

This album has so many great moments (especially in the title tracks) and I urge any Porcupine Tree fan who hasn't quite gotten into it yet to give it a few more tries. The bit in the middle of Phase Two with the female vocals followed by the guitar solo gets to me every time.

Steven Wilson regrets making this album. Why Mr Wilson? Yes it is obviously a tip to Pink Floyd in its layout. But at least it sounds original (compare this with Voyage 34 which is too close to Another Brick in the Wall IMO). And the songs are brilliant. And it got me interested in Pink Floyd. No regrets from me!

The Sky Moves Sideways is one of the most essential pieces of experimental and progressive rock ever written. By far the highlight of the album is the epic title track, divided into two phases of nearly twenty minutes. Phase one is lyrically and vocally perfect, and the ambient textures and emotion portray by the piece is second to none. The Moon Touches Your Shoulder continues the unique atmosphere, and Moonloop is a fantastic, liquid spacey trip.

Take Doctor Who, Pink Floyd and Ozric Tentacles and throw them in a blender: this is what you get. Contains some of the most poetic lyrical imagery I've ever heard.

Your feedback for The Sky Moves Sideways