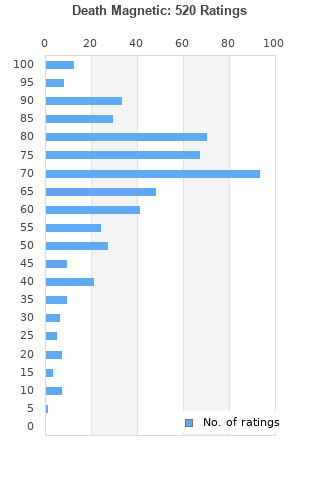 Death Magnetic - Metallica - CD
Condition: Good
Time left: 2h 4m 47s
Ships to: Worldwide
£4.00
Go to store
Product prices and availability are accurate as of the date indicated and are subject to change. Any price and availability information displayed on the linked website at the time of purchase will apply to the purchase of this product.  See full search results on eBay

Death Magnetic is ranked 6th best out of 19 albums by Metallica on BestEverAlbums.com.

The best album by Metallica is Master Of Puppets which is ranked number 109 in the list of all-time albums with a total rank score of 15,739. 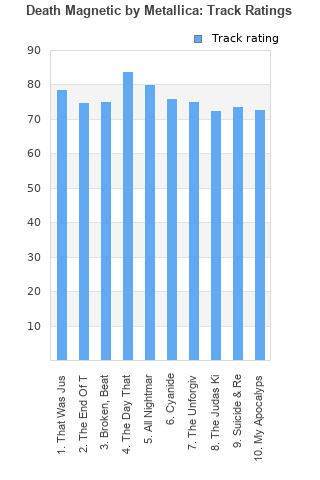 Rating metrics: Outliers can be removed when calculating a mean average to dampen the effects of ratings outside the normal distribution. This figure is provided as the trimmed mean. A high standard deviation can be legitimate, but can sometimes indicate 'gaming' is occurring. Consider a simplified example* of an item receiving ratings of 100, 50, & 0. The mean average rating would be 50. However, ratings of 55, 50 & 45 could also result in the same average. The second average might be more trusted because there is more consensus around a particular rating (a lower deviation).
(*In practice, some albums can have several thousand ratings)
This album has a mean average rating of 67.0/100. The trimmed mean (excluding outliers) is 68.0/100. The standard deviation for this album is 18.3.

The main debate I have about this album is that I can't decide if it's in my top five Metallica albums or not, its competition for that fifth spot being Kill 'Em All. KEA had that youthful energy/enthusiasm that can't be captured again, but it was very much a snapshot of their formative years. This album has some corny/cliched lyrics but Hetfield sings them with so much vitriol/passion (as he always does) that I can look past it. The songs are well structured and keep your interest throughout, and I honestly don't think there's a weak track on the record.

Aside from the riffs (which Hetfield ALWAYS delivers), the instrumentalists are not up to their 80's standard, which is, to be fair, quite a high bar to meet. At the time it was released, DM was hailed as a return to form for Kirk, but I think that was mostly due to his complete lack of presence on St. Anger rather than a true return to his shredder roots. Rob's playing always seems conservative, never really gets an opportunity to stretch out like Cliff used to. And I can't tell if Lars is playing well or not because everything from the drums is clipping so it just sounds bad lol.

The thing that sucks the most about this album is the production (common problem with a lot of their discography). I don't it find it endearing like I do with how ...And Justice For All was produced, it's often just grating to my ears. Despite that, this album still finds heavy rotation when I'm in one of my Metallica moods, which I get at least once per year for a few weeks. There's just something about it that brings me great joy. Maybe it's because they finally did another instrumental song, maybe it's because they're back to doing thrashy riffs in standard tuning after twenty years of not doing any, or maybe it's just a deep love for this band that makes me enjoy an album most others find mediocre.

to me, this is a Metallica comeback album after a string of much lesser releases. Back to form in both music and attitude, this was a nice surprise.

This record is good, but the songs are just to damn long. In my opinion, if they had cut the majority of them down to under 5 and a half minutes, then I think it would be a 90. Also, the clipping throughout is really unfortunate.

A good return for Metallica after the worst album of their career. Heavy riffs and guitar solos are back.

IMO, something of a comeback album for Metallica. While they will probably never again reach the heights of Puppets or Lightning, this was as close as a return to form as we could have hoped for.

Decent album that contained a bad production (on the CD version at least). I there was a lot of buzzing when I hear that version which made it a bit difficult for me to listen to. But this was an alright record in terms of the songs.

I don't understand the hate for this album. This was my favorite Metallica album since Master of Puppets IMO. One of my 10 favorite albums of the 21st century.

I don't get the hate for this record. It has some great songs for a genre which is not in its greatest era. I love the riffs on The Judas Kiss, Broken Beat & Scarred and The Day That Never Comes. The only questions I have are:

1. Unforgiven III? Really? Why?
2. Were you deaf in the studio? The volume is much too high and it ruins the quality of an overall good record. The best since 1988.

It seems that Metallica has set the bar so high that it's either iconic status or really bad. Most what they have done fall into that category. This however is just really good. It's not the greatest or their greatest but it isn't St Anger either. Certainly their best since The Black Album.

way better than st anger , i enjoyed this record , seen them live not long after this came out and they were great

Your feedback for Death Magnetic