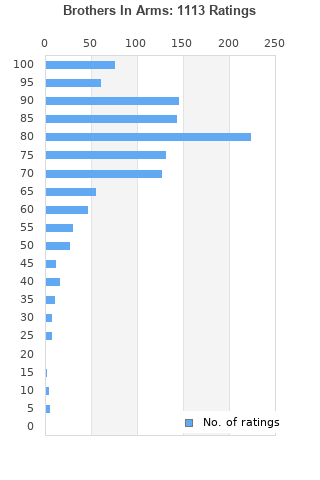 DIRE STRAITS UK RECORD COMPANY PROMO SHOP DISPLAY "BROTHERS IN ARMS" ALBUM 1985
Condition: Very Good
Time left: 48m 30s
Ships to: Worldwide
£95.00
Go to store
Product prices and availability are accurate as of the date indicated and are subject to change. Any price and availability information displayed on the linked website at the time of purchase will apply to the purchase of this product.  See full search results on eBay

Brothers In Arms is ranked as the best album by Dire Straits. 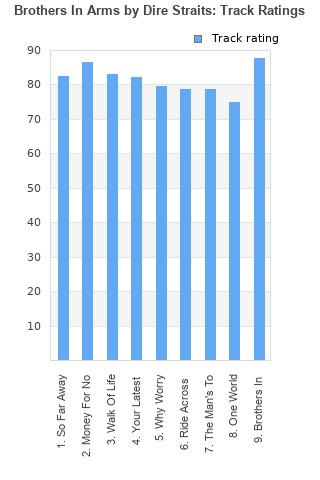 Rating metrics: Outliers can be removed when calculating a mean average to dampen the effects of ratings outside the normal distribution. This figure is provided as the trimmed mean. A high standard deviation can be legitimate, but can sometimes indicate 'gaming' is occurring. Consider a simplified example* of an item receiving ratings of 100, 50, & 0. The mean average rating would be 50. However, ratings of 55, 50 & 45 could also result in the same average. The second average might be more trusted because there is more consensus around a particular rating (a lower deviation).
(*In practice, some albums can have several thousand ratings)
This album is rated in the top 4% of all albums on BestEverAlbums.com. This album has a mean average rating of 77.0/100. The trimmed mean (excluding outliers) is 77.6/100. The standard deviation for this album is 16.0.

Brothers In Arms is one of those albums that has better production than songwriting. The first three songs and the title track are great, but the rest are pretty lifeless and one-note. Still, those songs are what make the album worth listening to.

Overproduced I might say, but I quite enjoy the sounds on here sometimes. I just wish they were implemented in actual good songs with a vocalist that doesn't sound like a poor man's Bob Dylan. I guess they were to busy picking the right guitars to show off their expertise. But the worst thing here is the hypocrisy of mocking pop music (calling them faggots) while the album is the most cheesy collection of simplistic hits ever with the most unnecessary usage of synth sound effects ever - hypocrisy I see in the whole fucking "classic" rock movement of the late '80s. Only the aesthetic of Bob Dylan and Jimi Hendrix (if they know it's Hendrix they're imitating) they inherit, the rest can just be thrown in the garbage bin and be replaced with folk wisdom sold as "harsh truths everybody knows but no one dares to say" and fetishism with one's own perceived hardships to justify one's own manliness and affection only expressed when you can "wipe away those bitter tears" off your "baby" - I am not making this up. And of course it's filled with Pink Floyd-ish unnecessarily long intros and outros, how else can we make our songs intelligent? Pathetic, just absolutely pathetic.

love to play this album in a rainy day and just relax.

My entry album for Dire Straits having loved the singles at the time - the title track is so delicate and emotional and one of my top all time tunes. So Far Away and the great Money For Nothing also stand out here although less keen on Walk Of Life (bit too country perhaps?)

I always skip "Money for Nothing" and "Walk of Life" when I listen to this. If i throw those out it is number one or two of their best albums. "Your Latest Trick" made its way onto every mixed tape I made between '85 and 2002ish when mixed tapes became fairly obsolete.

Honestly, this album is really boring, if it wasn't for Money for Nothing, my score would be lower.

Your feedback for Brothers In Arms