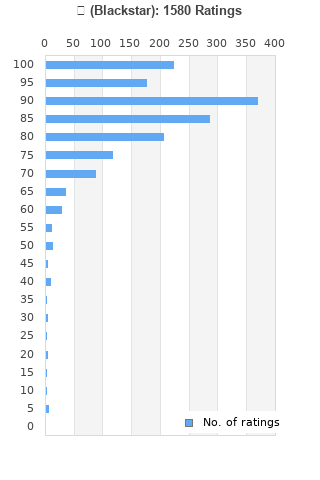 David Bowie - Blackstar Clear Vinyl LP Barnes & Noble Exclusive
Condition: New
Time left: 3h 58m
Ships to: Worldwide
$249.99
Go to store
Product prices and availability are accurate as of the date indicated and are subject to change. Any price and availability information displayed on the linked website at the time of purchase will apply to the purchase of this product.  See full search results on eBay

★ (Blackstar) is ranked 5th best out of 75 albums by David Bowie on BestEverAlbums.com.

The best album by David Bowie is The Rise And Fall Of Ziggy Stardust And The Spiders From Mars which is ranked number 9 in the list of all-time albums with a total rank score of 63,905. 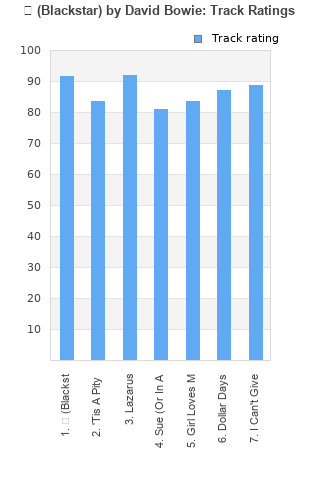 I Can't Give Everything Away
Rating: 89 (352 votes)Comments:

Rating metrics: Outliers can be removed when calculating a mean average to dampen the effects of ratings outside the normal distribution. This figure is provided as the trimmed mean. A high standard deviation can be legitimate, but can sometimes indicate 'gaming' is occurring. Consider a simplified example* of an item receiving ratings of 100, 50, & 0. The mean average rating would be 50. However, ratings of 55, 50 & 45 could also result in the same average. The second average might be more trusted because there is more consensus around a particular rating (a lower deviation).
(*In practice, some albums can have several thousand ratings)
This album is rated in the top 1% of all albums on BestEverAlbums.com. This album has a Bayesian average rating of 85.7/100, a mean average of 84.7/100, and a trimmed mean (excluding outliers) of 85.8/100. The standard deviation for this album is 13.2.

Bowie’s last album is a haunting masterpiece that leaves me speechless just very powerful and emotional.

His last is almost his best. That incredible opening track just sets us on our way on a magnificent collection. The only problem I find with it is how emotional it can make me. That ending as well - I Can't Give Myself Away.

A perfect goodbye. Bowie is a legend.

what a way to go out.

It's rare that someone ends their life on an artistic note but what should we have expected from Bowie. The titular track is a mysterious and occult ridden jazz ballad that effectively puts the listener on edge. The writing on "'Tis A Pity She Was A Whore" and "Girl Loves Me" do feel a bit hollow compared to the rest of the album. The prophetic concept is interesting but parts of the album feel disconnected from. Still, Blackstar is atmospheric and proper exit for a true artist.

David Bowie always surprised and was one step ahead.
And on this album he writes his own epitaph.
It's an album that comes from the context of his previous works but has this atmosphere that makes it magical.
Beautiful indeed.

Bowie knew he was gonna die, but it could've been easily treated and he would've survived. Instead, he decided to take death head-on and dissect what it meant to him. What an artist

Your feedback for ★ (Blackstar)