Wildflower (studio album) by The Avalanches 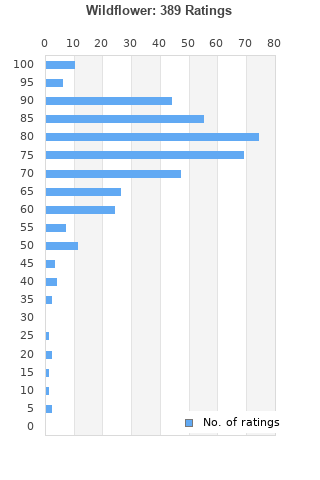 Wildflower by The Avalanches: Used
Condition: Very Good
Time left: 23h 21m 25s
Ships to: Worldwide
$3.49
Go to store
Product prices and availability are accurate as of the date indicated and are subject to change. Any price and availability information displayed on the linked website at the time of purchase will apply to the purchase of this product.  See full search results on eBay

Wildflower is ranked 2nd best out of 4 albums by The Avalanches on BestEverAlbums.com.

The best album by The Avalanches is Since I Left You which is ranked number 188 in the list of all-time albums with a total rank score of 10,137. 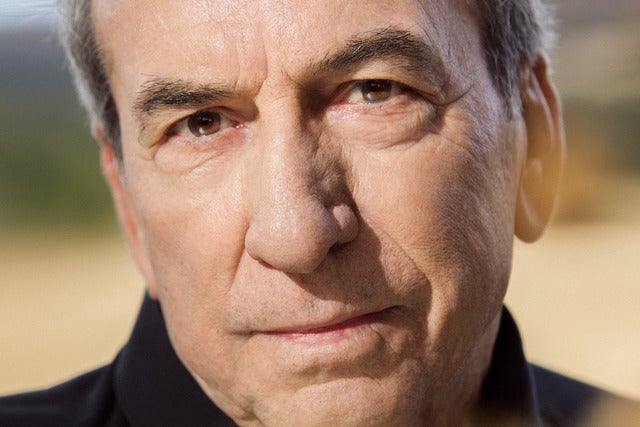 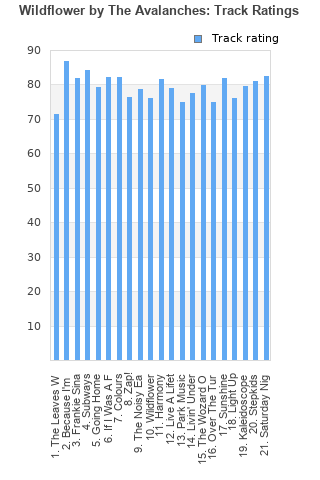 Rating metrics: Outliers can be removed when calculating a mean average to dampen the effects of ratings outside the normal distribution. This figure is provided as the trimmed mean. A high standard deviation can be legitimate, but can sometimes indicate 'gaming' is occurring. Consider a simplified example* of an item receiving ratings of 100, 50, & 0. The mean average rating would be 50. However, ratings of 55, 50 & 45 could also result in the same average. The second average might be more trusted because there is more consensus around a particular rating (a lower deviation).
(*In practice, some albums can have several thousand ratings)
This album is rated in the top 9% of all albums on BestEverAlbums.com. This album has a Bayesian average rating of 75.9/100, a mean average of 75.1/100, and a trimmed mean (excluding outliers) of 76.0/100. The standard deviation for this album is 14.4.

It had been such a long time since the last Avalanches release (SIXTEEN YEARS, PEOPLE) that I wasn’t really that hopeful for this. Absurdly, even though this is the same kind of plunderphonics they were hawking back in 2000, it’s landed at just the right time to sound fresh and new again.

Best track: Because I’m Me. Not a million miles away from Since I Left You in its construction, but who cares.

There is so much happening in every single one of these tracks. So many beautiful melodies, new layers of percussion to discover, and incredible mixing. I just can’t praise the attention to detail and originality of this album enough. Favorite album of 2016.

I don't know why, but this album clicks with me so much more than Since I Left You. It seems like lots of people love one or the other a lot more for some reason. IDK why. For me, other than Noisey Eater, which is just kinda dumb, and Frankie Sinatra, which is a mediocre song but takes some time to warm to and doesn't totally fit the vibe of the rest of the album, this album is a really beautiful collage of music. The highlights for me are Becuase I'm Me, If I Was A Folkstar, and Harmony.

I've listened to Since I Left You it seems like a thousand times since the day it dropped, and for some reason Wildflower just doesn't cut it. No flow, and a similar approach with no improved skill. Hate Frankie Sinatra and tried several times to listen to the full album and wanted to tear my hair out before it was half way through. I tried and still disappointed.

People obviously dislike this because it's not Since I Left You, which is kind of unfair since very few records will ever sound like that.
In it's own right, Wildflower is flawed but it's still a completely fun and enjoyable listen. Plus, only the Avalanches could pull off a song as mesmerizingly lush and beautiful as "Colours".

I stayed away for a year so I wouldn't head in expecting some grand triumph. It could just be an album. Also, I didn't feel like listening to it until today.

And it's terrific! It's not nearly as good as Since I Left You, but so little music is. Wildflower is still lovely and dynamic as can be. Even at in its less memorable moments, this is still really good.

A pretty good follow up, even if it did not meet up to the expectations.

I think if Since I Left You was like riding a massive, swooping wave of neon candy sprinkles, this was just enjoying the incoming tide from a distance as it slowly swallowed up the beach whole. More of a relaxed daisy-age concoction in comparison to Since I Left You's giant soul/hip-hop-tronica masterstroke, enjoyable but still wise to temper your expectations and expect more of a pleasent encore than another special-snowflake windfall, but it's still quite deftly produced and quite catchy overall (if ultimately containing a bit too much filler this time around).

Favorite tracks: Because I'm Me, Frankie Sinatra, Subways, Going Home, If I Was A Folkstar, Sunshine, Saturday Night Inside Out

Your feedback for Wildflower