Who Are You? (track) by Black Sabbath 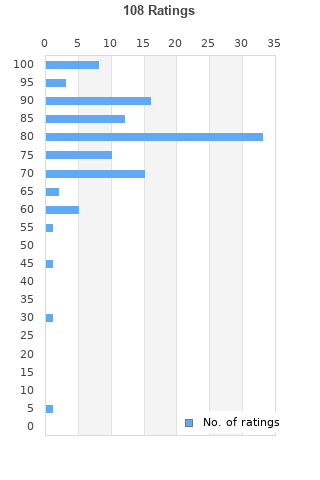 Who Are You? appears on the following album(s) by Black Sabbath:

Rare CD Card sleeve Mini LP Black Sabbath Bloody Sabbra Cadabra Who Are You?
Condition: Brand New
Time left: 29d 23h 41m 54s
Ships to: Worldwide
$16.95
Go to store
Product prices and availability are accurate as of the date indicated and are subject to change. Any price and availability information displayed on the linked website at the time of purchase will apply to the purchase of this product.  See full search results on eBay

Who Are You? ratings

Rating metrics: Outliers can be removed when calculating a mean average to dampen the effects of ratings outside the normal distribution. This figure is provided as the trimmed mean. A high standard deviation can be legitimate, but can sometimes indicate 'gaming' is occurring. Consider a simplified example* of an item receiving ratings of 100, 50, & 0. The mean average rating would be 50. However, ratings of 55, 50 & 45 could also result in the same average. The second average might be more trusted because there is more consensus around a particular rating (a lower deviation).
(*In practice, some tracks can have several thousand ratings)
This track is rated in the top 11% of all tracks on BestEverAlbums.com. This track has a Bayesian average rating of 79.0/100, a mean average of 78.0/100, and a trimmed mean (excluding outliers) of 79.3/100. The standard deviation for this track is 13.9.

Who Are You? favourites

Who Are You? comments

I do not understand the annoyance regarding "Who Are You?" that is voiced by many other reviewers. Well, Black Sabbath has now come closer to progressive rock and gets help from Rick Wakeman and a Minimoog, but I can only applaud this. Don’t get me wrong. I am certainly also a fan of the first three albums, and I understand the legacy of “Paranoid”, but let's face it: at that time a band was expected to grow and use the constantly updated contemporary sound equipment. Possibly Sabbath thought that they could not stay behind and that gradually evolving from Stoner Rock should get a chance, especially to avoid a standstill or running in a loop. In this unusual track the typical Iommi riff on guitar is traded in for a great and sinister melody line that - especially when that melody line gets doubled - is fascinating enough in terms of timbre (The Moog filters are definitely among the best) to successfully carry the Ozzy vocals. According to the literature, the most important part of the composition was delivered by Ozzy. I may never find out the truth, but I am inclined to believe that Wakeman has translated the Ozzy's riff into an exceptionally beautiful "programming" of the Moog. The comparison with prog rock is not entirely right. Sabbath maintained its identity. Admittedly, the synthesizer solo in the break is quite the same as the traditional progrock use of the minimoog. But is this song too slow? Maybe so, but in its slowness this track remains fascinating. Geezer's lyrics have also undergone a transformation. Whoever tries to find out what this song is about does not pass a closed, dense and highly suggestive text. Geezer has grown enormously as a writer. He is less pronounced and wraps up the occult themes in alienating darkness. In the past, evil was called by name ("Satan sitting there, he's smiling") or the text was a bit too literal and somewhat banal ("The pope at the end of a rope"). With "Who are you", the listener is given the freedom to create his own image of the dangerous identity that Ozzy addresses. Oh, and while listening, don’t forget the high pitched vocals of Ozzy are also doubled perfectly. Some flaws here and there are not bothering. The spaciousness that remains in the overall sound image makes this song very digestible. The progrock level increases during the break. Not the most thundering piano part and as mentioned before, the sound of the Moog in the break is a bit disappointing, but the outro is of an exceptionally high level. Just like the lyrics, the bizarre sounds become very suggestive and create a self-contained universe. For fans of Heavy Metal and / or Hardrock this is understandably a strange thing to do, but I gladly admit that I think the song is fantastic. Other bands would not venture into this experiment and that is exactly what Sabbath does. More, more!

Your feedback for Who Are You?