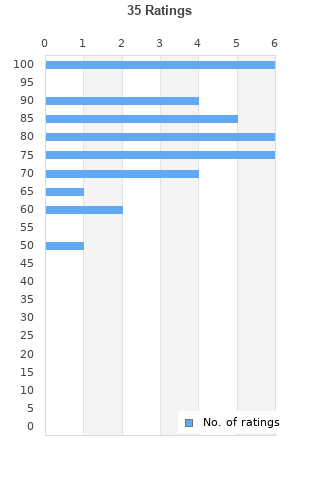 Jump They Say appears on the following album(s) by David Bowie:

David Bowie - Jump They Say / Pallas Athena Vinyl 12" EP Meat Beat Manifesto NM+
Condition: Used
Time left: 8h 36m 26s
Ships to: Worldwide
$14.00
Go to store
Product prices and availability are accurate as of the date indicated and are subject to change. Any price and availability information displayed on the linked website at the time of purchase will apply to the purchase of this product.  See full search results on eBay

Rating metrics: Outliers can be removed when calculating a mean average to dampen the effects of ratings outside the normal distribution. This figure is provided as the trimmed mean. A high standard deviation can be legitimate, but can sometimes indicate 'gaming' is occurring. Consider a simplified example* of an item receiving ratings of 100, 50, & 0. The mean average rating would be 50. However, ratings of 55, 50 & 45 could also result in the same average. The second average might be more trusted because there is more consensus around a particular rating (a lower deviation).
(*In practice, some tracks can have several thousand ratings)
This track is rated in the top 10% of all tracks on BestEverAlbums.com. This track has a Bayesian average rating of 79.3/100, a mean average of 80.2/100, and a trimmed mean (excluding outliers) of 80.2/100. The standard deviation for this track is 11.6.

Unfortunately, this is the only song on the album that is worth listening to. "Jump" - with a particularly fascinating video - is better than all other tracks from the album put together. This song is the only moment when Bowie's songwriting is not drowning in a particularly shallow puddle of easy listening and an overdose of neurotic saxophones, but despite the wretched, uninterested and substandard production, it still has the power to excel. It is likely that Bowie (once again) sings about his mentally ill half-brother. Not only is "Jump" musically a brilliant song that effortlessly reaches the high standard of Bowie's catalog and even largely exceeds expectations, the lyrics are also fascinating and evocative, describing a mentally ill person who is surrounded by a surrounding crowd that encourages him to commit suicide. Just a little more about the video: no one ever looked better as a corpse than Bowie after his fall from a great height. It's clear that Bowie's genius is coming to the surface, even though in the case of this White Noise album it is in the midst of an ugly tangle of very mediocre to downright bad songs.

Your feedback for Jump They Say