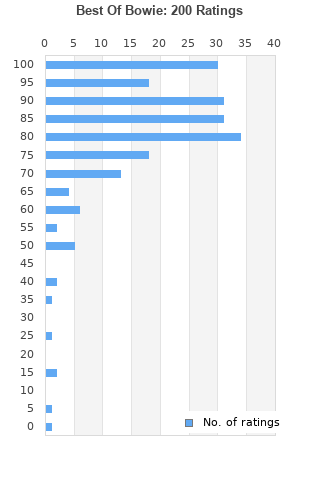 Best Of Bowie is ranked 24th best out of 88 albums by David Bowie on BestEverAlbums.com. 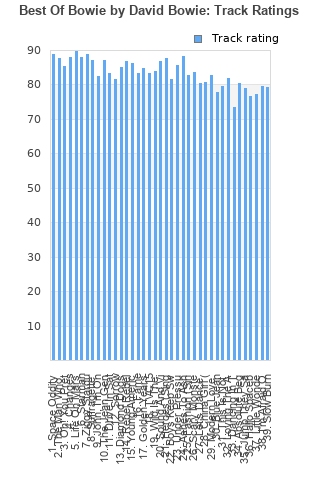 Rating metrics: Outliers can be removed when calculating a mean average to dampen the effects of ratings outside the normal distribution. This figure is provided as the trimmed mean. A high standard deviation can be legitimate, but can sometimes indicate 'gaming' is occurring. Consider a simplified example* of an item receiving ratings of 100, 50, & 0. The mean average rating would be 50. However, ratings of 55, 50 & 45 could also result in the same average. The second average might be more trusted because there is more consensus around a particular rating (a lower deviation).
(*In practice, some albums can have several thousand ratings)
This album is rated in the top 1% of all albums on BestEverAlbums.com. This album has a Bayesian average rating of 82.7/100, a mean average of 81.4/100, and a trimmed mean (excluding outliers) of 83.2/100. The standard deviation for this album is 17.3.

I'm a big Bowie fan and love each of his era's (although mid 80's to 90's was a bit challenging) and love all the songs here - although note the different track lists available. I wondered how a casual listener feels about the diverse style of the album - that must be a bit of a challenge

Actually, this is just a favorite songs comp. However, the set was released in 21 different regions with 21 different track listings (and there were also single and double disc versions for many regions). The track listings were determined based on which Bowie songs were most popular in each of the 21 regions. So a Best of Bowie purchased in Chile would be different from one purchased in Germany, because, apparently, Chileans like different Bowie songs than Germans. The track listing here is the UK and Europe 2 disc version. My version (US 2 disc) has Moonage Daydream on it (among other differences).

An excellent overview. In response to yeyemy34, moonage daydream, was not a single. It's a singles compilation, not a favourite songs album. You can't complain with the quality of songs. Brilliantly entertaining.

How many compilation albums do we really need from David Bowie?

The best of Bowie, does what it says on the tin

Bowie is a hit and miss for me. Young Americans, Golden Years, Heroes, Ashes to Ashes, Fashion, Modern Love, This is Not America, and Blue Jean just don't do it for me. Maybe it is because of the whole 80s not being my thing, thing. The rest is amazing. Space Oddity, Changes, Fame, Under Pressure, and I'm Afraid of Americans are my fav of his best of stuff.

I guess this is a deluxe version or something, as Spotify version has 20 songs, and a different listing.

Decided to pick this up to nab some of his well-known non-album and soundtrack-only songs. Also I don't have the album Space Oddity was on so that alone made it a worthy buy. Worth it if you want an okay beginner's guide to Bowie.

Your feedback for Best Of Bowie