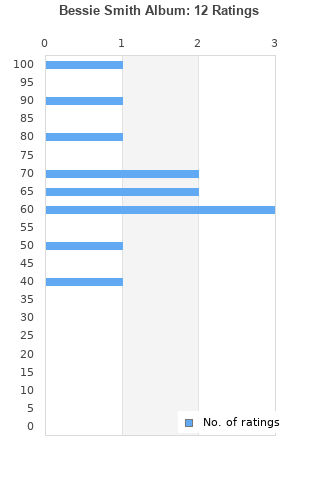 Bessie Smith Album is ranked 5th best out of 11 albums by Bessie Smith on BestEverAlbums.com.

The best album by Bessie Smith is Empress Of The Blues which is ranked number 8525 in the list of all-time albums with a total rank score of 139. 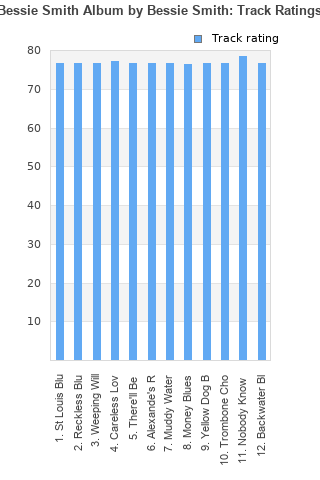 Rating metrics: Outliers can be removed when calculating a mean average to dampen the effects of ratings outside the normal distribution. This figure is provided as the trimmed mean. A high standard deviation can be legitimate, but can sometimes indicate 'gaming' is occurring. Consider a simplified example* of an item receiving ratings of 100, 50, & 0. The mean average rating would be 50. However, ratings of 55, 50 & 45 could also result in the same average. The second average might be more trusted because there is more consensus around a particular rating (a lower deviation).
(*In practice, some albums can have several thousand ratings)
This album has a Bayesian average rating of 70.2/100, a mean average of 67.7/100, and a trimmed mean (excluding outliers) of 67.7/100. The standard deviation for this album is 16.4.

This must be one of the first collections of recordings on record that was referred to as an album. Not sure but certainly non classical wise I'd guess. It's basically an anthology of 6 previously released singles on 78. Sometime later it would be possible to issue a collection like this on single vinyl disc but not here. Here it is presented as how the singles were issued originally, as in 6 x shellac 78s. As an album. And it's quite wonderful. And I've not heard it on shellac no. That would be nice but digital will have to do.

Your feedback for Bessie Smith Album