Vicar In A Tutu (track) by The Smiths 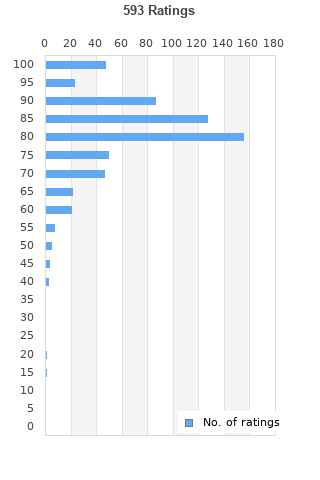 Vicar In A Tutu appears on the following album(s) by The Smiths:

THE SMITHS panic*vicar in a tutu 1986 UK ROUGH TRADE 7" 45
Condition: Used
Time left: 8d 14h 2m 10s
Ships to: Worldwide
£4.99
Go to store
Product prices and availability are accurate as of the date indicated and are subject to change. Any price and availability information displayed on the linked website at the time of purchase will apply to the purchase of this product.  See full search results on eBay

Vicar In A Tutu ratings

Rating metrics: Outliers can be removed when calculating a mean average to dampen the effects of ratings outside the normal distribution. This figure is provided as the trimmed mean. A high standard deviation can be legitimate, but can sometimes indicate 'gaming' is occurring. Consider a simplified example* of an item receiving ratings of 100, 50, & 0. The mean average rating would be 50. However, ratings of 55, 50 & 45 could also result in the same average. The second average might be more trusted because there is more consensus around a particular rating (a lower deviation).
(*In practice, some tracks can have several thousand ratings)
This track is rated in the top 4% of all tracks on BestEverAlbums.com. This track has a Bayesian average rating of 81.8/100, a mean average of 81.3/100, and a trimmed mean (excluding outliers) of 81.9/100. The standard deviation for this track is 11.4.

Vicar In A Tutu favourites

Vicar In A Tutu comments

When the weakest song on the album is still a delight then you know this is a timeless record.

This track reminds me of when the Beatles would throw lightweight folksy pop ditties onto their albums, particularly on the White Album (Rocky Raccoon or Bungalow Bill somehow come to mind when I think of the parallels) which was a record that Johnny Marr adored very much.

Like Frankly Mr. Shankly, it's strange, entertaining, and is a nice breath between two monumentally good tracks. Along with Cemetery Gates, Bigmouth Strikes Again, and most of the rest of TQID, it serves to straddle the line between a genuine romantic narrative and a funny satirical outlook on human existence.

Quite cool for what it is.

Not sure if I love this or not, but a strange, nice song :D

Hah, what a stupid sounding song. Although, not the worst one on the album - that title goes to "Some Girls Are Bigger Than Others".

What's everyone's problem with this? I think it's good.

Nothing wrong with a Vicar In A Tutu.

Your feedback for Vicar In A Tutu