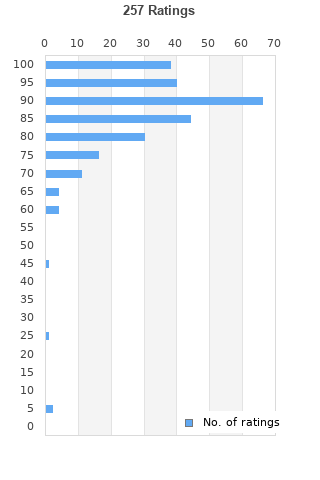 A Rush And A Push & The Land Is Ours appears on the following album(s) by The Smiths:

Sorry, no matches on eBay for "A Rush And A Push & The Land Is Ours The Smiths".
See full search results on eBay

A Rush And A Push & The Land Is Ours ratings

Rating metrics: Outliers can be removed when calculating a mean average to dampen the effects of ratings outside the normal distribution. This figure is provided as the trimmed mean. A high standard deviation can be legitimate, but can sometimes indicate 'gaming' is occurring. Consider a simplified example* of an item receiving ratings of 100, 50, & 0. The mean average rating would be 50. However, ratings of 55, 50 & 45 could also result in the same average. The second average might be more trusted because there is more consensus around a particular rating (a lower deviation).
(*In practice, some tracks can have several thousand ratings)
This track is rated in the top 1% of all tracks on BestEverAlbums.com. This track has a Bayesian average rating of 87.2/100, a mean average of 87.0/100, and a trimmed mean (excluding outliers) of 87.6/100. The standard deviation for this track is 11.3.

A Rush And A Push & The Land Is Ours favourites

A Rush And A Push & The Land Is Ours comments

One of two Smiths tracks to feature no guitar whatsoever, the other being 'Asleep'. Marr stated that he was influenced by the Beatles' "White Album" when he recorded Strangeways, in that he wanted to introduce more instruments and overhaul his sound.

A complete lack of what defines' the Smiths instrumental virtuosity (layered guitar orchestration) is a strong statement to make on an album opener, but Marr's harpsichord-sounding keyboard arrangement is very memorable and Moz's lyrics are on point as usual.