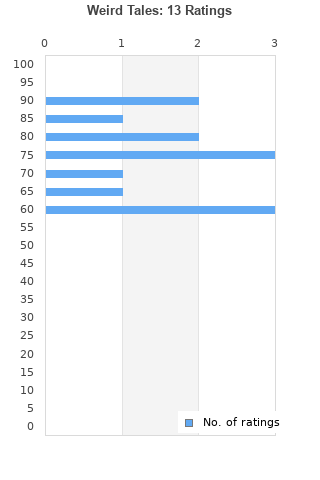 Golden Smog-Weird Tales (CD, 1998, Ryko) Excellent condition
Condition: Very Good
Time left: 3d 11h 9m 7s
Ships to: Worldwide
$4.99
Go to store
Product prices and availability are accurate as of the date indicated and are subject to change. Any price and availability information displayed on the linked website at the time of purchase will apply to the purchase of this product.  See full search results on eBay

Weird Tales is ranked as the best album by Golden Smog. 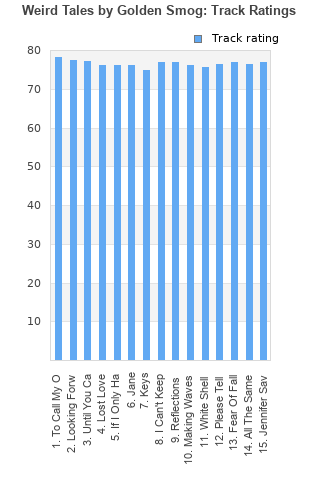 Rating metrics: Outliers can be removed when calculating a mean average to dampen the effects of ratings outside the normal distribution. This figure is provided as the trimmed mean. A high standard deviation can be legitimate, but can sometimes indicate 'gaming' is occurring. Consider a simplified example* of an item receiving ratings of 100, 50, & 0. The mean average rating would be 50. However, ratings of 55, 50 & 45 could also result in the same average. The second average might be more trusted because there is more consensus around a particular rating (a lower deviation).
(*In practice, some albums can have several thousand ratings)
This album has a Bayesian average rating of 74.1/100, a mean average of 75.0/100, and a trimmed mean (excluding outliers) of 75.0/100. The standard deviation for this album is 10.7.

Got here through my attachment to the sounds of Soul Asylum, and when I found out that Dan Murphy had branched out from that band to this one I had to give a listen. I am ecstatic that I did. The collective songwriting talents of the members works to excellent effect. I'm not a big fan of alt-country, but I am a fan of witty,clever lyrics so this is in my wheelhouse. I'll listen to more albums by these guys.

It took me entirely too long to discover this band.

Jeff Tweedy, Dan Murphy, Gary Louris and Kraig Johnson's follow-up to the excellent Down By the Old Mainstream is just as excellent.

I discovered this at a listening booth in a record shop in Santa Monica while on vacation, at the time having never heard of Wilco, and not realizing the Jayhawks connection.

I refuse to believe that I'm the only one here who likes Golden Smog....

Your feedback for Weird Tales