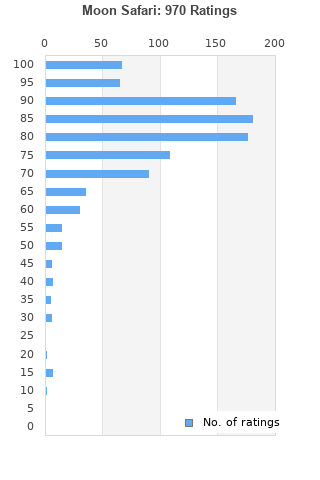 Air.  Bundle of 2 CD Albums. Moon Safari and - The Virgin Suicides (OMPS)
Condition: Very Good
Time left: 15h 38m 42s
Ships to: Worldwide
£7.50
Go to store
Product prices and availability are accurate as of the date indicated and are subject to change. Any price and availability information displayed on the linked website at the time of purchase will apply to the purchase of this product.  See full search results on eBay

Moon Safari is ranked as the best album by Air (FR). 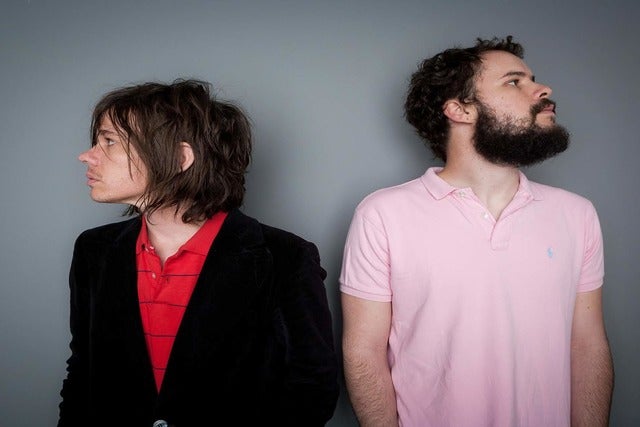 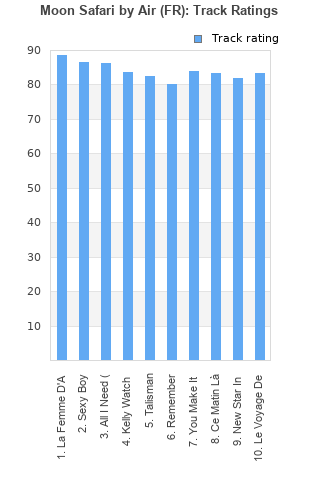 Rating metrics: Outliers can be removed when calculating a mean average to dampen the effects of ratings outside the normal distribution. This figure is provided as the trimmed mean. A high standard deviation can be legitimate, but can sometimes indicate 'gaming' is occurring. Consider a simplified example* of an item receiving ratings of 100, 50, & 0. The mean average rating would be 50. However, ratings of 55, 50 & 45 could also result in the same average. The second average might be more trusted because there is more consensus around a particular rating (a lower deviation).
(*In practice, some albums can have several thousand ratings)
This album is rated in the top 1% of all albums on BestEverAlbums.com. This album has a Bayesian average rating of 81.2/100, a mean average of 80.3/100, and a trimmed mean (excluding outliers) of 81.3/100. The standard deviation for this album is 13.9.

For an electronica album, this sounds awfully like soft rock. The balance between the two genres is perfect, however, and bears repeated listening. It is a testament to the staying power of this LP that it was released in 1998 yet sounds as fresh today as it did upon release. Part of that is the way the band have channelled the classic songwriters of the Brill Building pop behemoth, sounding like these tracks could have been written for (or by) Carol King in an alternate dimension. It’s easy listening, but without the negative connotations that that sometimes carries. A brilliant album.
High Points: La Femme D’Argent; Sexy Boy ; Talisman ; Remember

One of the most ear-pleasing albums. You can hear it multiple times repeatedly without ever getting bored.

A difficult album to describe but incredibly relaxing yet still has a dance vibe to it. High reccomendation for some chillout electronic music. One of the best records of 1998.

Moon Safari is somewhere in between Discovery and Music Has the Right to Children. Not great, but really relaxing.

All Songs are my Fav. Tracks!!!

A very chill album that can destress the tensest shoulders. Not every track is stellar but each one maintains the cool atmosphere and never deviates too much. For some people, this might make the album seem a bit monotonous...but as David Byrne once said, "Some people don't know shit about the Air."

Not a fan of this genre, but I like this album a lot.

It's really cool... but doesn't hold my attention.

Your feedback for Moon Safari