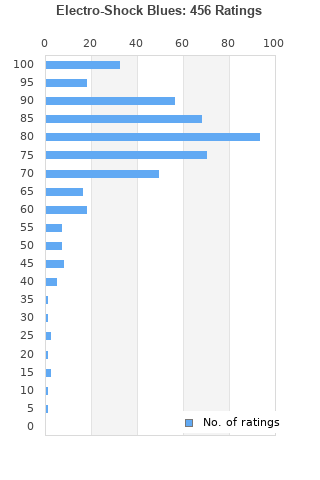 Electro-Shock Blues is ranked as the best album by Eels. 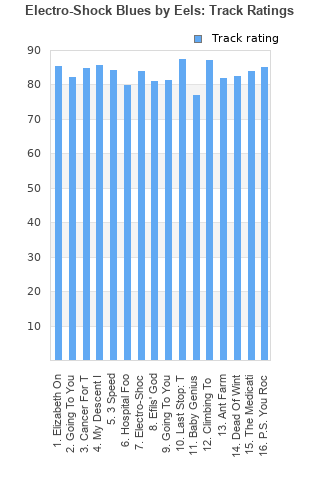 My Descent Into Madness
Rating: 85 (106 votes)Comments:

Rating metrics: Outliers can be removed when calculating a mean average to dampen the effects of ratings outside the normal distribution. This figure is provided as the trimmed mean. A high standard deviation can be legitimate, but can sometimes indicate 'gaming' is occurring. Consider a simplified example* of an item receiving ratings of 100, 50, & 0. The mean average rating would be 50. However, ratings of 55, 50 & 45 could also result in the same average. The second average might be more trusted because there is more consensus around a particular rating (a lower deviation).
(*In practice, some albums can have several thousand ratings)
This album is rated in the top 2% of all albums on BestEverAlbums.com. This album has a Bayesian average rating of 78.7/100, a mean average of 77.8/100, and a trimmed mean (excluding outliers) of 78.9/100. The standard deviation for this album is 14.9.

I changed my mind. This album is great in a wholly unique way.

The notion that tragedy will immediately equal artistic brilliance is immediately disproven by this album. The music is fine enough, nothing super interesting. The background for this album is significantly more interesting than the music itself.

This is a great album about tragic life events. Consistently good throughout with a generally sombre tone to match the events. But he bears his soul bravely here and shares his pain but you don't feel that he is seeking our sympathy, he just wishes to express these events and thoughts for himself and perhaps they will help others deal with similar situations
Elizabeth on the Bathroom Floor, Electro Shop Blues, Baby Genius, Climbing To The Moon, The Medication Is Wearing Off and P.S. You Rock My World all stand out tracks with all others still good although not too keen on Hospital Food

If you've never heard this album I would strongly recommend to first have a listen , then jump on line & learn about the tragic real life circumstances behind this album & then go back and have a second listen . Trust me you will get the most from this album following this method.

Sad , sad album that is consistently good rather than brilliant ( IMHO there is no one killer diller track/ tracks) .

If you don't cry during Climbing up to the Moon I don't know what to say to you.

Never heard of them. Just started listening to Blinking Lights and was struck how quick it was to get into. Hurried home to see what their best was. Very excited reading all these comments :)

Your feedback for Electro-Shock Blues