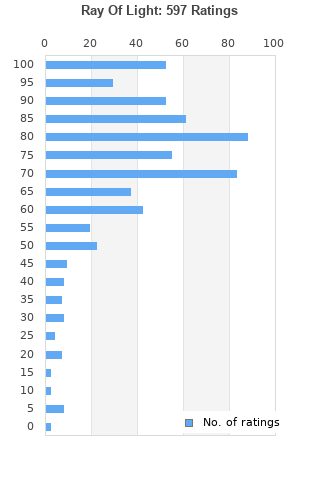 Ray Of Light is ranked as the best album by Madonna. 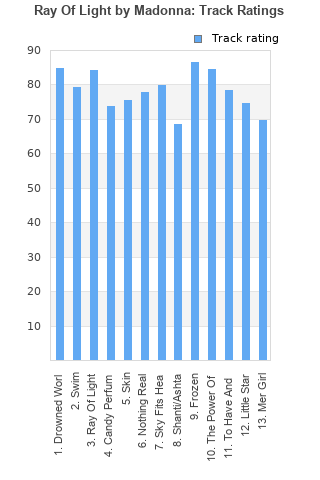 Rating metrics: Outliers can be removed when calculating a mean average to dampen the effects of ratings outside the normal distribution. This figure is provided as the trimmed mean. A high standard deviation can be legitimate, but can sometimes indicate 'gaming' is occurring. Consider a simplified example* of an item receiving ratings of 100, 50, & 0. The mean average rating would be 50. However, ratings of 55, 50 & 45 could also result in the same average. The second average might be more trusted because there is more consensus around a particular rating (a lower deviation).
(*In practice, some albums can have several thousand ratings)
This album has a Bayesian average rating of 74.2/100, a mean average of 72.7/100, and a trimmed mean (excluding outliers) of 74.2/100. The standard deviation for this album is 20.2.

This is on the low end of the Madonna spectrum for me.

An unexpected album that once again proved Madonna as the queen of reinvention.

Why this one? Of all her albums, why choose the one with rather uninspired ‘90s electronic production, with less expressive vocals than I’m expecting from Madonna, with... ugh, you know where this reminds me of? Those hip hop albums that get a lot of praise, and people comment on it like: “I don’t like hip hop, but this...”. They’re just more ‘white’: more melody, more choruses, more self-loathing in the lyrics. Which aren’t necessarily bad things, and the praise is sometimes deserved, but what’s so bad about the hip hop albums that don’t do those things?
And now that I think of it, this is on of Madonna’s least ‘feminine’ and sex-focused albums. I think that explains a lot.

Anyway, the album is still good, and shows how Madonna can survive in any musical environment.

Your feedback for Ray Of Light