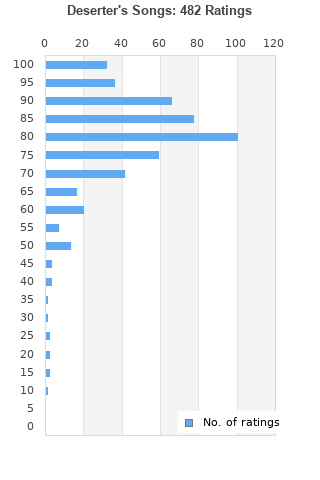 Deserter's Songs is ranked as the best album by Mercury Rev. 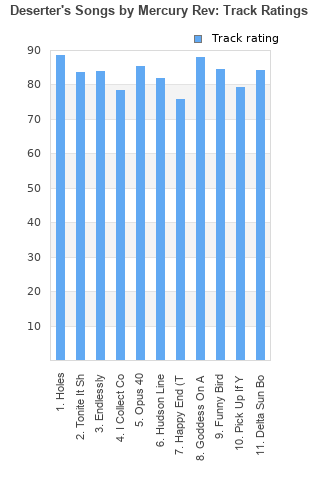 Rating metrics: Outliers can be removed when calculating a mean average to dampen the effects of ratings outside the normal distribution. This figure is provided as the trimmed mean. A high standard deviation can be legitimate, but can sometimes indicate 'gaming' is occurring. Consider a simplified example* of an item receiving ratings of 100, 50, & 0. The mean average rating would be 50. However, ratings of 55, 50 & 45 could also result in the same average. The second average might be more trusted because there is more consensus around a particular rating (a lower deviation).
(*In practice, some albums can have several thousand ratings)
This album is rated in the top 2% of all albums on BestEverAlbums.com. This album has a Bayesian average rating of 80.2/100, a mean average of 79.2/100, and a trimmed mean (excluding outliers) of 80.3/100. The standard deviation for this album is 14.8.

Didn't do much for me.

I think this album is underrated, so much similarity with Soft Bulletin (Flaming Lips) wich is on top 20 (and the best of the decade for me) best of the 1990's and this is #127

The music is quite beautiful. But it's hard to get past the singer's voice. It's a bit cringey. I don't know what to rate this. I give the music 4.5 stars, and the singing 2 stars.

The legendary 'Deserters Songs' who's sum is greater than its parts

I became obsessed with this album around the time it came out in 1998 and in many ways I still am obsessed. Need proof I was obsessed ?. I have 3 physical CD copies of 'Deserters Songs' - the original standard CD , a Limited Edition release with Bonus 5 track EP and finally a special numbered release with cardboard cover and post cards included

Why do I love this album so much ? Well much like Neutral Milk Hotels 'In the Aeroplane ..' it has that X factor I struggle to put into words , its weird and wonky and feels old (but isn't ) and is almost perfect

“As we pulled these Deserted Songs to the surface whatever had been holding us hostage cracked and withered in the blistering power of this music, and these songs allowed us to find ourselves and lose ourselves at the same time… It is the magic of the vibrating universe; the music of the Angels”

As I write this late June 2019 'Deserters Songs' shamefully sits in the 600's on BEA All-Time album list , if ever an album deserved to be in the top 500 this is it

Consistently good. Flaming Lips comparisons make sense considering they shared studio time sometime between 1997-99 (the making of this and the Lips' Soft Bulletin) and probably used much of the same gear, equipment, and recording/engineering personnel.

Probably a grower...
Top tracks: Holes, Tonite It Shows, Goddess Of A Hiway

Easily their best album Goddess On A Highway, Funny Bird, Holes, Hudson Line & Bottleneck Stomp are some of the best things they have ever delivered. I still prefer Flaming Lips though,as they do this style of music the best.

Wow, some of the best dreamy music! And it really rocks at times! I only think the last track is a bit weirdly placed. I am never really excited for that song to start after Pick Up If You're There.

Your feedback for Deserter's Songs