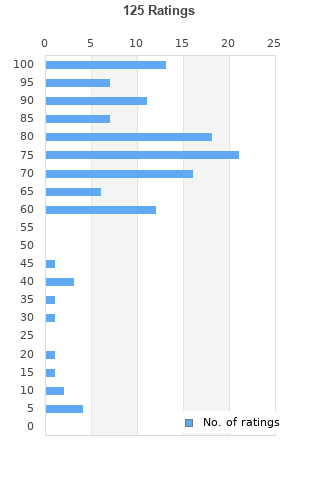 The 2nd Law: Isolated System appears on the following album(s) by Muse:

Listen to The 2nd Law: Isolated System on YouTube

Rating metrics: Outliers can be removed when calculating a mean average to dampen the effects of ratings outside the normal distribution. This figure is provided as the trimmed mean. A high standard deviation can be legitimate, but can sometimes indicate 'gaming' is occurring. Consider a simplified example* of an item receiving ratings of 100, 50, & 0. The mean average rating would be 50. However, ratings of 55, 50 & 45 could also result in the same average. The second average might be more trusted because there is more consensus around a particular rating (a lower deviation).
(*In practice, some tracks can have several thousand ratings)
This track has a Bayesian average rating of 75.6/100, a mean average of 73.2/100, and a trimmed mean (excluding outliers) of 75.6/100. The standard deviation for this track is 21.7.

Works fine as the closing track.

I agree with Space-Dementia. That's why it was used as the soundtrack for World War Z. As soon as I listened to it on the cinema I thought "Muse". One of the standout tracks of this generally weak album.

Totally kickass instrumental that sounds like you're in the middle of an apocalypse and you're the only one who can save the world. This song is fucking awesome.

Your feedback for The 2nd Law: Isolated System