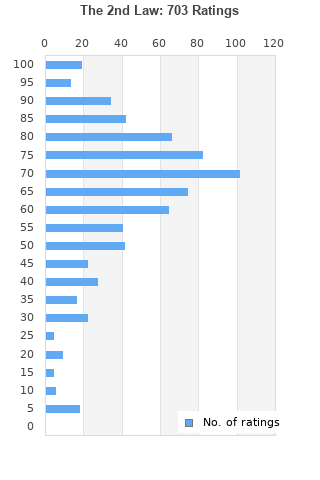 The 2nd Law is ranked 6th best out of 18 albums by Muse on BestEverAlbums.com.

The best album by Muse is Absolution which is ranked number 187 in the list of all-time albums with a total rank score of 9,386. 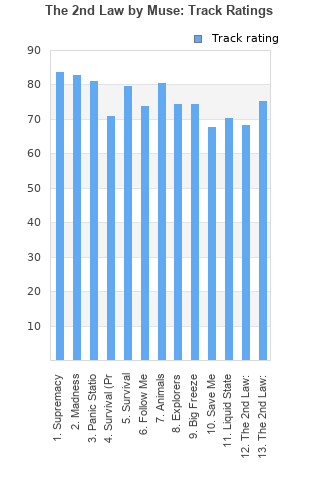 Rating metrics: Outliers can be removed when calculating a mean average to dampen the effects of ratings outside the normal distribution. This figure is provided as the trimmed mean. A high standard deviation can be legitimate, but can sometimes indicate 'gaming' is occurring. Consider a simplified example* of an item receiving ratings of 100, 50, & 0. The mean average rating would be 50. However, ratings of 55, 50 & 45 could also result in the same average. The second average might be more trusted because there is more consensus around a particular rating (a lower deviation).
(*In practice, some albums can have several thousand ratings)
This album has a Bayesian average rating of 63.9/100, a mean average of 63.8/100, and a trimmed mean (excluding outliers) of 63.8/100. The standard deviation for this album is 20.8.

If you don't take the over the top stuff too seriously, if you don't mind dubstep and if you skip some songs, it is quite decent.

Maybe the poppiest of all their albums. But that's okay, it's fun. Rather this than when they try to be deep.

I love Muse and all, but man I hated this.

This is a great album by Muse with great variety and strong songs. the album starts and finishes brilliantly.

This album was Muse's first misstep when going down this dystopian path. Resistance was able to provide some commentary (although a bit simplistic) and was able to cover some of it's deficiencies by being a kind of homage to 1984. 2nd law shows that Muse actually doesn't know what they are talking about and they are really just peddling vague thoughts and negative feelings towards things. I don't even really understand what they stand for besides general fear if those in power and throwing around buzz words hoping people will interpret them as deep thoughts.

That being said, the music is also weaker than the rest of their discography. Madness feels lazy, and most of the rest of the tracks feel very ordinary and don't stand out much. The only song that feels memorable to me is panic station. It isn't their best song, but it actually stands on its own musically.

This album is really underrated, but I am not surprised as everything by Muse seems to be hated in this site. I think it deserves at least a 70/100 BEA score, but whatever. 7/10.

Kind of Queen and U2. Love it! Madness is the best song from Muse

A little poppier than The Resistance, but still a great album to listen to.

Your feedback for The 2nd Law