Straight To Hell (track) by The Clash 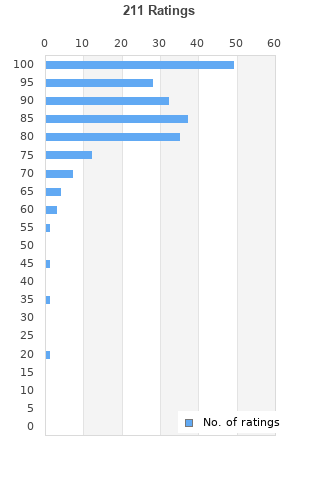 Straight To Hell appears on the following album(s) by The Clash:

The Clash Should I Stay Or Should Go Straight To Hell 7" VINYL 45 PICTURE DISC
Condition: Used
$28.50

Rating metrics: Outliers can be removed when calculating a mean average to dampen the effects of ratings outside the normal distribution. This figure is provided as the trimmed mean. A high standard deviation can be legitimate, but can sometimes indicate 'gaming' is occurring. Consider a simplified example* of an item receiving ratings of 100, 50, & 0. The mean average rating would be 50. However, ratings of 55, 50 & 45 could also result in the same average. The second average might be more trusted because there is more consensus around a particular rating (a lower deviation).
(*In practice, some tracks can have several thousand ratings)
This track is rated in the top 1% of all tracks on BestEverAlbums.com. This track has a Bayesian average rating of 87.5/100, a mean average of 87.2/100, and a trimmed mean (excluding outliers) of 88.0/100. The standard deviation for this track is 12.0.

A contender for the best song the Clash ever did. Definitely deserves more than an 87.

Some people are happy to dismiss Punk as a lot of noise that spurred on a shift towards alternative music and gave us several years of anarchist-fans telling the government to sod off. Not that that's incorrect, but when The Clash manage to write a scathing assessment of British and American attitudes to immigration, those comments are naive as f*ck.

They never hit a higher point than this after Combat Rock's release - it was the end of the line for sure - but for a band who had always been on the beating pulse of politics, especially those of the many ethnicities living in their home boroughs of Hammersmith and Shepheards Bush, even this was a crowning achievement. Not only could they break down attitudes to protest based on culture and upbringing (White Riot) or the Afro-Caribbean struggle of West London ((White Man) In Hammersmith Palais), they could tap into the very undercurrent that drove racist views in Western society, and which still to do to this day.

And just to add to all that, every member of the band is on fire here in what is a far more solemn and toned down tune to their usual headbangers. Masterpiece would be an understatement.

*And then M.I.A. comes along in 2007 to use this in one the greatest samples in pop music history, further adding to its themes of immigration and the attitudes around it. What more could you ask for?

Masterpiece of a song all the way through. Should have a way higher rating.

Your feedback for Straight To Hell