Speak To Me (track) by Pink Floyd 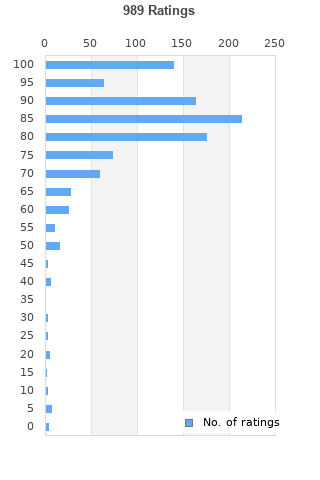 Speak To Me appears on the following album(s) by Pink Floyd:

Speak To Me ratings

Rating metrics: Outliers can be removed when calculating a mean average to dampen the effects of ratings outside the normal distribution. This figure is provided as the trimmed mean. A high standard deviation can be legitimate, but can sometimes indicate 'gaming' is occurring. Consider a simplified example* of an item receiving ratings of 100, 50, & 0. The mean average rating would be 50. However, ratings of 55, 50 & 45 could also result in the same average. The second average might be more trusted because there is more consensus around a particular rating (a lower deviation).
(*In practice, some tracks can have several thousand ratings)
This track is rated in the top 3% of all tracks on BestEverAlbums.com. This track has a Bayesian average rating of 83.6/100, a mean average of 82.2/100, and a trimmed mean (excluding outliers) of 83.7/100. The standard deviation for this track is 15.5.

Speak To Me favourites

Speak To Me comments

It's literally a minute of silence. Ok, there are some quiet sound effects, but this doesn't count as a song to me, and therefore gets an average rating.

To all those complaining about why this track has such a high score despite the fact that it's not really a song, I would reply that I rate it high because it's the first glimpse you receive of the album, it's the track that welcomes you, the unwrapping of an amazing classic album. The intro, to put it plainly.

The reason it's rated this high is undoubtfully due to the greatness of the album itself, I mean, I wouldn't imagine this song to be out as a single in any given year. However, I think the track needs the entire album to follow it just as much as the album might need an appealable intro. Given the trippy nature of it as a whole, you can't expect them to start off directly with Breathe without any foreplay.

"Speak To Me" has those haunting heartbeats that lay down the foundations for what appears to be a short summary of all the craziness that is about to ensue, as well as some concepts that are going to be tackled. You got time, money and manic laughter, along with helicopters and Clare Torry's heavenly screams. I don't think that last sentence adds up to "Oh he must be talking about a song" if you didn't know the song prior. And underneath all that chaos, the sound of the human heart, to emphasize that all of this chaos amounts to things that are part of human nature; it's a part of being alive.

I get that it's not really a song, and that it shouldn't really count as one, but it's just not an 85. Other Interludes/Intros for other albums automatically get 40s and 50s. This really isn't much different, even if it's on one of my favorite albums.

"Speak To Me": I consider the first two tracks to be one, as "Speak To Me" isn't exactly a song. However, it does work well as an opener to an album that focuses a lot on the topic of mental illness. The first thing you hear on the album is a heartbeat that gets gradually louder, followed by the sounds of various ticking clocks (which foreshadows the opening of the song "Time") and a man saying "I've been mad for fucking years; absolutely years...". we then hear the cash register sounds from the opening of the track "Money". We hear a second person say "I've always been mad. I know I've been. So you have to explain why you're mad" while someone laughs in the background (We hear this laugh several times throughout the album).

Hard to rate as a song, but sets the mood for the album, so a nice little opener :)

@Epicpenguin13 you have to rate the song for what it is, "Speak to Me" functions as an intro and for that role is impeccable, in 1 minute you are instantly plunged into the depths of the album's core themes of life, anxiety, and delusion.

In my opinion, you can't take 'Speak to Me' as a single track as it really kinda synergises well with Breathe.

The heartbeat sounds that start the track off allude to the next track.

The first track of any album has the benefit of being an 'intro' song should the artist choose it to be. I definitely would say this 1 minute contribution to the album is exactly that and so the review is going to be more lenient.

I'd be shocked (but might be proven wrong) if this track got played over and over again by itself. It is part of an outstanding album, so is likely to be appreciated by those who like every song, but if you aren't looking for the story, this track is a missing jigsaw piece.

Why is the rating so high? 84? And there are great songs that don't get past 80 because of the fact that they're on an otherwise under appreciated album. This isn't a song. Don't rate it high just because it's on Dark Side of the Moon.

Your feedback for Speak To Me