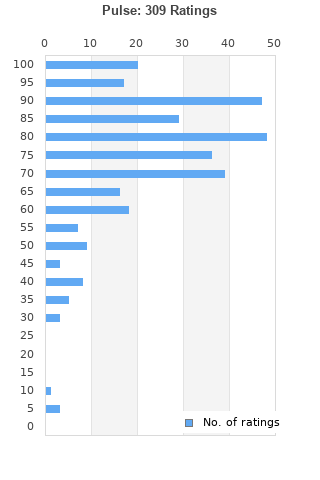 Pulse is ranked 16th best out of 36 albums by Pink Floyd on BestEverAlbums.com.

The best album by Pink Floyd is The Dark Side Of The Moon which is ranked number 2 in the list of all-time albums with a total rank score of 81,451. 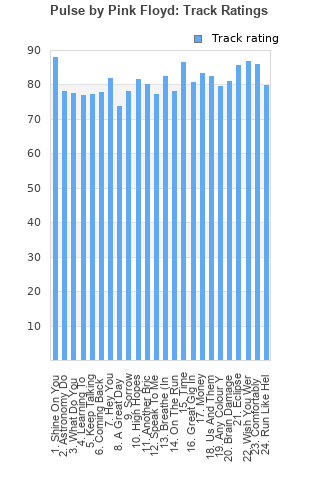 Rating metrics: Outliers can be removed when calculating a mean average to dampen the effects of ratings outside the normal distribution. This figure is provided as the trimmed mean. A high standard deviation can be legitimate, but can sometimes indicate 'gaming' is occurring. Consider a simplified example* of an item receiving ratings of 100, 50, & 0. The mean average rating would be 50. However, ratings of 55, 50 & 45 could also result in the same average. The second average might be more trusted because there is more consensus around a particular rating (a lower deviation).
(*In practice, some albums can have several thousand ratings)
This album is rated in the top 7% of all albums on BestEverAlbums.com. This album has a Bayesian average rating of 76.0/100, a mean average of 75.7/100, and a trimmed mean (excluding outliers) of 76.1/100. The standard deviation for this album is 16.6.

A solid live album, though it's a shame the band didn't put out any official live albums during the classic era in the 70s!

I was also lucky enough to see Pink Floyd in concert during this tour (Turin), great live album, unlike subsequent studio albums Waters was not missed on this one.

This is one heck of a live album. Okay, so Waters is missing, but the other members really are on top form here and the musicians and backing singers they bring in are top notch.

The first half is made up mostly of songs from Division Bell (this was the tour for that album after all) but the second album features Dark Side of the Moon in its entirety, Wish You Were Here, and Comfortably Numb (with the best version of the solo I am aware of exists. Seriously: check this solo out!!).

I was lucky enough to see Pink Floyd in concert during this tour, and we were at one of the dates where they played DSOTM in its entirety. This album captures much of the live experience, which is exactly what a live album should do. There are some great versions here - Hey You, Run Like Hell, Eclipse. One or two cuts don't stand up to the originals (I'm looking at you, Money), but that doesn't stop this being an exciting listen from beginning to end.

Since when is Pink Floyd live not good?

Absolutely fantastic live album. Superior to Delicate Sound of Thunder in my opinion. Definitely worth a listen if you want to hear Floyd live.

The second half includes a full run through of Dark Side of the Moon followed by a killer encore. The first half is pretty good too

Your feedback for Pulse