The Dark Side Of The Moon (studio album) by Pink Floyd

The Dark Side Of The Moon by Pink Floyd
Year: 1973
Overall rank: 2nd 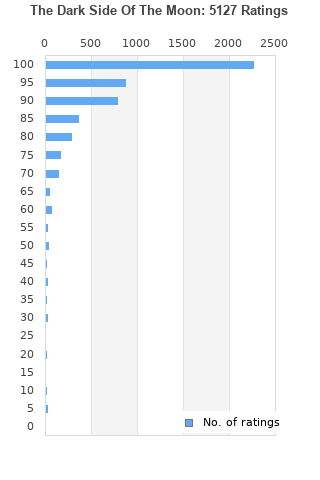 The Dark Side Of The Moon is ranked as the best album by Pink Floyd. 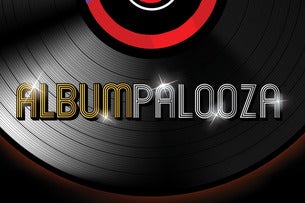 Listen to The Dark Side Of The Moon on YouTube 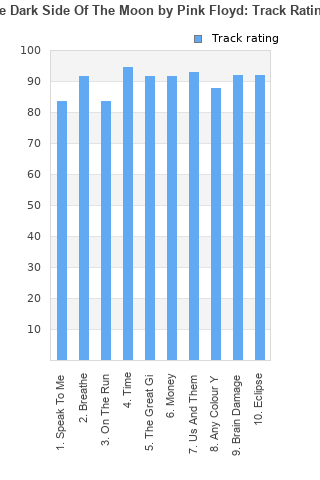 The Dark Side Of The Moon rankings

The Dark Side Of The Moon collection

The Dark Side Of The Moon ratings

Rating metrics: Outliers can be removed when calculating a mean average to dampen the effects of ratings outside the normal distribution. This figure is provided as the trimmed mean. A high standard deviation can be legitimate, but can sometimes indicate 'gaming' is occurring. Consider a simplified example* of an item receiving ratings of 100, 50, & 0. The mean average rating would be 50. However, ratings of 55, 50 & 45 could also result in the same average. The second average might be more trusted because there is more consensus around a particular rating (a lower deviation).
(*In practice, some albums can have several thousand ratings)
This album is rated in the top 1% of all albums on BestEverAlbums.com. This album has a Bayesian average rating of 92.3/100, a mean average of 91.1/100, and a trimmed mean (excluding outliers) of 92.3/100. The standard deviation for this album is 13.7.

The Dark Side Of The Moon favourites

The Dark Side Of The Moon comments

It's a legendary album, but when we talk about Pink Floyd is really hard to define the best one.

I know i will get hate for this, but i really think Wish You Were Here is better. The Latter half here isn't as good as up until Money for me personally, while Wish you Were Here holds up throughout. Top 10 ever, but not second best and not top 5. Album cover is one of the best tho

What can I say that hasn't already been said about this album? It's most likely the greatest album ever made. Perfection from start to finish (and from finish to start). This album is so perfectly amalgamated you can't tell where one track ends and another starts. In fact, it's all just one long track isn't it? 100/100.

This album is really well written. This album is really good for melodies like on Speak to Me/Breathe and chord shapes like on Any Colour You Like. I like the melodies and it's really good for a lot of reasons like that. As a keyboardist, this is a landmark album to study for playing. The art and atmospheres are good also. The lyrics are pretty good with the concepts of what it talks about. To me, this album is eons ahead of a lot of albums for best ever album ever. It's not my favorite album because I like Dream Pop as a my favorite genre of music. If this album was Dream Pop, it would be my favorite. However, it's just a personal preference. So technically, I am the problem for this music XD. But if you are a musician, I strongly recommend studying this, Sgt Pepper for melodies and composition, and Nick Drake's Pink Moon (for chord progressions). You will become an amazing musician in no time. I don't kick down other people's music because mine is so good, I want others to make amazing music like me. I am not insecure with the music I make and thats why everybody who makes music that they are insecure with is not confident about it for a reason :P. Haters gonna hate but there is a reason why these albums are considered the best of all time and it's because of how the music is written. OK Computer should also be studied to for effects, sounds, and compositionally satisfying music.

A true high watermark for the prog rock movement. From the intriguing opening thumps, through the dizzyingly good lyrics to Time, right up to the climactic organ of Eclipse, this is a superb album. One of the things going for it is that it doesn't necessarily click first time (it took me a year or so to get into it). But once it does...
There's barely a hair out of place on this record and its staying power attests to that. The songwriting is outstanding, the performances are legendary and the production is way ahead of its time. Do yourself a favour and go and listen to it now.

Come on. It’s Dark Side Of The Moon. Does it really need a explanation?

Iconic and for great reason, it is unbelievable and carries on standing the test of time with ease. The production value is worth the price of admission alone and proves how great the studios at Abbey Road really are. The songs are greatly written masterpieces that stand amongst the greatest of all time.

This album is simply amazing. It has great chord shapes and melodies but it would be slightly better if it had better chord progressions. I can look past it though because of other reasons. This album has art all over it and is well written. I study this album as a musician for quite a bit of reasons. Its got a lot going for it. There's a reason this album is a classic and why its so famous. This is an album that has stood the test of time for its outstanding music quality and it rightfully does so. I actually feel bad for people who don't understand why this album is great. I love the music and I love all of it but sometimes sound is arbitrary and I personally don't understand people who say they don't like it but you have to admit, the lyrics are genuinely phenomenal and I would argue that it is best album of all time worthy for lyrics. If you don't get it or get the universal concepts of life, thats shame on you for not understanding its universal messages and how they can be interpreted.

Everybody will tell you that the production on this album is the best ever. Well, that's a lie. Just check Steely Dan albums from the same decade or Donald Fagen first album. The songs are all pretty good but The Great Gig In The Sky is annoying with all its shouting and screaming. A guitar solo would have made a way better fit.

This is just the perfect album, one of the best ever made if not the best (I'm on the line between this one and Revolver by The Beatles). There are so many incredible songs on here that it creates such an unique experience. Time, Money, Brain Damage, Us And Them are the best, but realistically there is no bad track on here.

Your feedback for The Dark Side Of The Moon