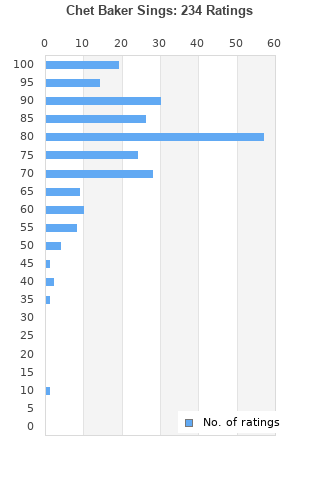 CHET BAKER Plays And Sings The Great Ballads CD 1992 Jazz - Pop / Cool Jazz
Condition: Very Good
Time left: 3h 44m 34s
Ships to: Worldwide
$3.73
Go to store
Product prices and availability are accurate as of the date indicated and are subject to change. Any price and availability information displayed on the linked website at the time of purchase will apply to the purchase of this product.  See full search results on eBay

Chet Baker Sings is ranked as the best album by Chet Baker. 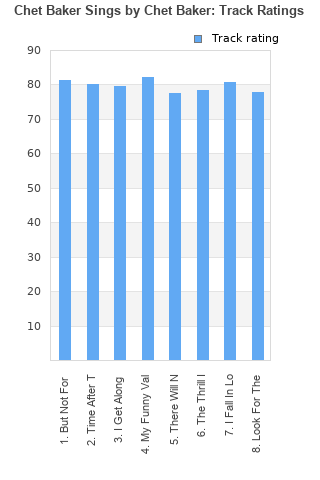 Rating metrics: Outliers can be removed when calculating a mean average to dampen the effects of ratings outside the normal distribution. This figure is provided as the trimmed mean. A high standard deviation can be legitimate, but can sometimes indicate 'gaming' is occurring. Consider a simplified example* of an item receiving ratings of 100, 50, & 0. The mean average rating would be 50. However, ratings of 55, 50 & 45 could also result in the same average. The second average might be more trusted because there is more consensus around a particular rating (a lower deviation).
(*In practice, some albums can have several thousand ratings)
This album is rated in the top 2% of all albums on BestEverAlbums.com. This album has a Bayesian average rating of 79.5/100, a mean average of 79.2/100, and a trimmed mean (excluding outliers) of 79.8/100. The standard deviation for this album is 13.6.

'But Not for Me' and 'My Funny Valentine' are some favourites. The rest of the tracks here fall between average and listenable. A decent album overall.

I Fall In Love Too Easily

By Good. Chet is the predecessor of any sad man, with any kind of instrument. This is 1954!

He don't wail, he don't try, he just does. Please try him out. Preferable with inears on a sad cafe/bar in a strange country, or just your local inn.

Very smooth voice. The music is not my cup of tea. I feel the focus is on voice and lyrics and musically is boring.

NO! You can't have a song called 'I've Never Been In Love Before' on an album with a song called 'I Fall in Love Too Easily'! This makes no sense! You're a blatant liar Chet Baker and you know it!

Stunningly creepy wonderful record. Chet had one of the smoothest voices I've ever heard. Very boyish. My Funny Valentine made my skin crawl. I doubt Chet intended for this record to be so melancholy and disturbing but he succeeded elegantly. An instant hit with me.

It's a talentet voice, but I don't like the tone in his voice...just not for me.

Your feedback for Chet Baker Sings