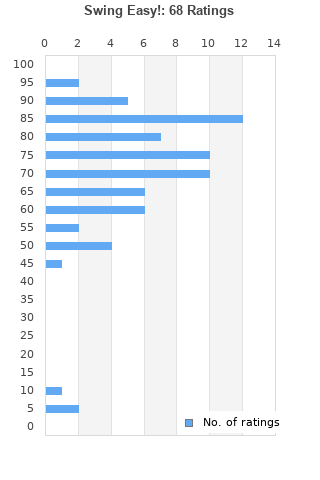 Swing Easy! is ranked 7th best out of 97 albums by Frank Sinatra on BestEverAlbums.com.

The best album by Frank Sinatra is In The Wee Small Hours which is ranked number 389 in the list of all-time albums with a total rank score of 4,837. 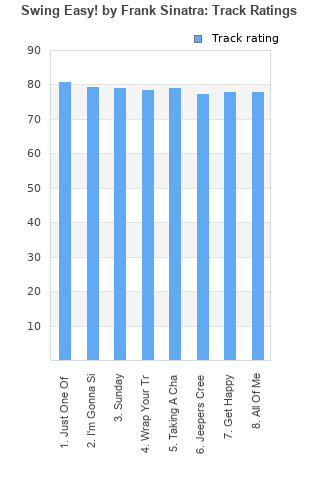 Rating metrics: Outliers can be removed when calculating a mean average to dampen the effects of ratings outside the normal distribution. This figure is provided as the trimmed mean. A high standard deviation can be legitimate, but can sometimes indicate 'gaming' is occurring. Consider a simplified example* of an item receiving ratings of 100, 50, & 0. The mean average rating would be 50. However, ratings of 55, 50 & 45 could also result in the same average. The second average might be more trusted because there is more consensus around a particular rating (a lower deviation).
(*In practice, some albums can have several thousand ratings)
This album has a Bayesian average rating of 73.7/100, a mean average of 70.8/100, and a trimmed mean (excluding outliers) of 73.9/100. The standard deviation for this album is 18.1.

Similar to its predecessor Songs for Young Lovers and almost as good.

Another brilliant Frank Sinatra album. Collaborating with Nelson Riddle, Sinatra produces a pleasing easy on the ear recording. Originally an eight track LP, it has now been extended to twelve, still, the original release is lovely. Featuring, I'm gonna sit right down and write myself a letter, and, all of me, and though the extended version adds songs such as, lean baby, and, I love you, the original is still probably better. Good album.

In the early 50's this album was combined with Young Lovers to form 1 LP.

Your feedback for Swing Easy!