Rock Around The Clock by Bill Haley And His Comets
(Compilation album)
Year: 1955
Overall rank: 2,160th 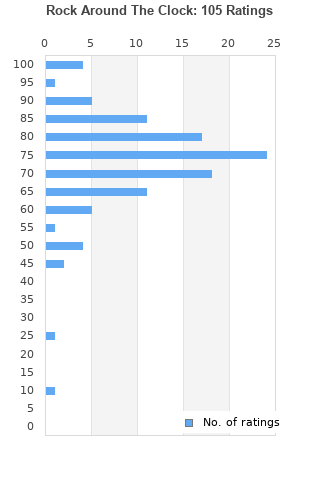 Bill Haley And His Comets bestography

Rock Around The Clock is ranked as the best album by Bill Haley And His Comets. 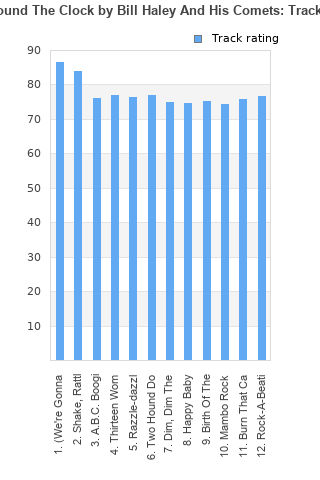 Rock Around The Clock rankings

Rock Around The Clock collection

Rock Around The Clock ratings

Rating metrics: Outliers can be removed when calculating a mean average to dampen the effects of ratings outside the normal distribution. This figure is provided as the trimmed mean. A high standard deviation can be legitimate, but can sometimes indicate 'gaming' is occurring. Consider a simplified example* of an item receiving ratings of 100, 50, & 0. The mean average rating would be 50. However, ratings of 55, 50 & 45 could also result in the same average. The second average might be more trusted because there is more consensus around a particular rating (a lower deviation).
(*In practice, some albums can have several thousand ratings)
This album has a Bayesian average rating of 73.9/100, a mean average of 72.8/100, and a trimmed mean (excluding outliers) of 74.0/100. The standard deviation for this album is 14.0.

Rock Around The Clock favourites

Rock Around The Clock comments

Let's be real. You don't give an album like this a 10 rating. Doing so, denotes ignorance or maybe musical prejudice. You need to transport yourself back to 1955 to understand how groundbreaking this music was at the time.

(To alelsupreme) ...Although delayed some years...

Dude, you came here just to denigrate the album, you need to have a little common sense, I'm not the biggest fan of this album but I know the historical importance in relation to Rock and Roll, and there are at least four great songs here, and and historically it's more relevant than the things of "My Bloody Valentine", "Radiohead" and "Pixies" that you gave high marks, by the way, on one of the best albums of all time as "Slowhand" by Clapton, with very well created songs and a production and sonority well above the average you also denigrated. Anyway, you are one more here on this site who does not have the aptitude to make album evaluations because it takes taste over analysis, between your opinion and nothingness, nothingness seems to be much more consistent.

I love the guitar solos on this album. Really makes it great.

I like the guitar on this album. On the first four songs Danny Cedrone played the guitar (he died shortly after the recording). The guitar player on the rest of the album is Franny Beecher.

For it's time it was quite the thing... now it is very dated. First two tracks are pretty timeless rock n' roll. The rest seems like all the same song except for Birth of the Boogie has some interesting drums at least.

I almost think of it as this: you'd hire this band to entertain/dance to. Great artist... probably not.

Your feedback for Rock Around The Clock