In The Wee Small Hours (studio album) by Frank Sinatra 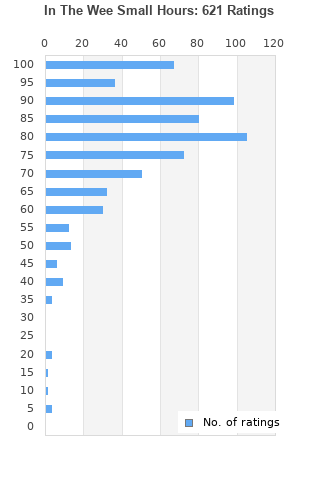 In The Wee Small Hours is ranked as the best album by Frank Sinatra.

Listen to In The Wee Small Hours on YouTube 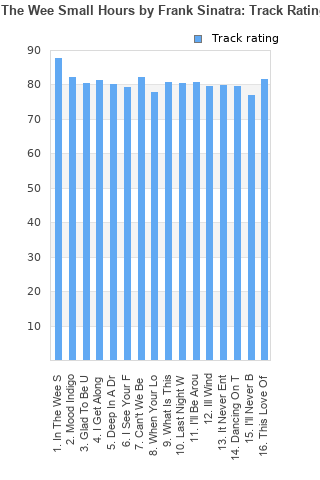 In The Wee Small Hours Of The Morning
Rating: 88 (141 votes)Comments:

In The Wee Small Hours rankings

In The Wee Small Hours collection

In The Wee Small Hours ratings

Rating metrics: Outliers can be removed when calculating a mean average to dampen the effects of ratings outside the normal distribution. This figure is provided as the trimmed mean. A high standard deviation can be legitimate, but can sometimes indicate 'gaming' is occurring. Consider a simplified example* of an item receiving ratings of 100, 50, & 0. The mean average rating would be 50. However, ratings of 55, 50 & 45 could also result in the same average. The second average might be more trusted because there is more consensus around a particular rating (a lower deviation).
(*In practice, some albums can have several thousand ratings)
This album is rated in the top 2% of all albums on BestEverAlbums.com. This album has a Bayesian average rating of 80.0/100, a mean average of 79.2/100, and a trimmed mean (excluding outliers) of 80.1/100. The standard deviation for this album is 15.9.

In The Wee Small Hours favourites

In The Wee Small Hours comments

This is a very important album in music with it being one of the earliest concept albums ever released. The influence this album has had is monumental and this makes it a must listen. The consistent themes of the songs are a positive as it makes the sound feel really cohesive. You also do find yourself getting lost in Sinatra's introspective mood making this a perfect listen late at night. The vocal is powerful and simply blows me away with each listen. However, the record drags on for far too long and it gets very repetitive by the end. Every time I put this album on I get distracted by other things and I get bored often. It lacks variety and the track listing is bloated. Musically, it could be more experimental as well. Overall, the quality of the music is questionable but the significance of this release is huge making it a must listen.

Very sad and moody record that is hauntingly beautiful and sounds like the finest traditional pop.

Sinatra gets sad... and presents and absolute masterwork on the art of singing.

Listen this in the night, alone and with some alcohol and you will feel it friends

It’s significance in popular music is undeniable, I just wish I enjoyed the actual music more :(

Now I know why 45's were more popular than albums back in the 1950s, listening to more than two Frank Sinatra (etc.) songs at a time is simply exhausting.

In The Wee Small Hours Of The Morning
I'll Be Around

"In The Wee Small Hours" is a cold 50s ballads album. Maybe the first set of recordings actually thought to be a fully flahsed-out LP with sort of a "theme" in mind.

Sinatra is one of those big guys that I never actually understood for a long time, and to this day I still think he is a little bit overrated, especially because music as we know evolved, what I mean by that Is that he is not a composer, and to me that is a really, really big thing.

Nevertheless, It is "ancient" albuns like this one, that really proves that the old format still holds-up sometimes. Sinatra is capable of picking up a set of songs that talks to each other in a special way, making It a very moody album, that makes the songs more emotional-gripping when you listen to the tracks in a sequence.

The title track, "Glad to be Unhappy", "I Get along without you very well", "Can't We Be Friends?", And "Last Night When We Where Young" are songs that build up the mood perfectly, making It very hard to not feel at least a bit sad.

God I think I would crumble if I listened to this in the same mood as Sinatra.

What a strong album! Frank's voice is strong, sensitive and at it's best on this moody concept album. Along with many, I have this as the Best Album of 1955.

Best tracks: Mood Indigo, When your Lover has Gone, In the Wee Small Hours of the Morning.

Your feedback for In The Wee Small Hours