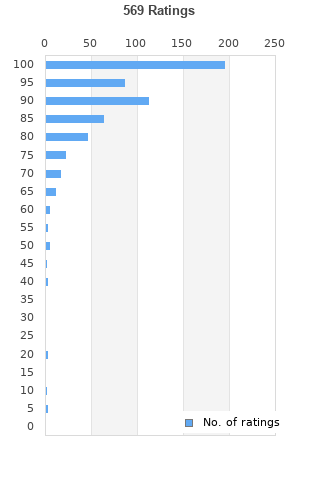 Visions Of Johanna appears on the following album(s) by Bob Dylan:

BOB DYLAN~VISION OF JOHANNA~LP~BD 002~BERKELEY RECORD~MADE IN UK~IN SHRINK~1975
Condition: Used
Time left: 23d 22h 24m 57s
Ships to: Worldwide
$39.00
Go to store
Product prices and availability are accurate as of the date indicated and are subject to change. Any price and availability information displayed on the linked website at the time of purchase will apply to the purchase of this product.  See full search results on eBay

Rating metrics: Outliers can be removed when calculating a mean average to dampen the effects of ratings outside the normal distribution. This figure is provided as the trimmed mean. A high standard deviation can be legitimate, but can sometimes indicate 'gaming' is occurring. Consider a simplified example* of an item receiving ratings of 100, 50, & 0. The mean average rating would be 50. However, ratings of 55, 50 & 45 could also result in the same average. The second average might be more trusted because there is more consensus around a particular rating (a lower deviation).
(*In practice, some tracks can have several thousand ratings)
This track is rated in the top 1% of all tracks on BestEverAlbums.com. This track has a Bayesian average rating of 90.6/100, a mean average of 89.9/100, and a trimmed mean (excluding outliers) of 90.9/100. The standard deviation for this track is 12.3.

I was at a party once and I met a girl named Johanna after this song. She said her dad was a mad Dylan fan. I spent most of the evening quoting the song and telling her just how great her dad’s taste must be.

I would then go and mingle and another great line or couplet would come back to me and I’d go up to her again and tell her a bit more. That’s Dylan. Just when you think you’ve got a handle on how great he is, he keeps giving.

By the way Johanna, if you ever read this, sorry for being that over-earnest guy bugging you at that party.

For my money, the greatest song of all time.

songwriting at its most fluid, natural and great self :)

The heatpipes just cough, what a line I love it.

Simple and powerful chords made this as one of the top three Dylan's song.

Soft and beautiful, "Visions of Johanna" is definitely in the best of Bob Dylan.

One of my absolute favourite songs. This one rocks my socks off as much as fast-paced hard rock does

Your feedback for Visions Of Johanna