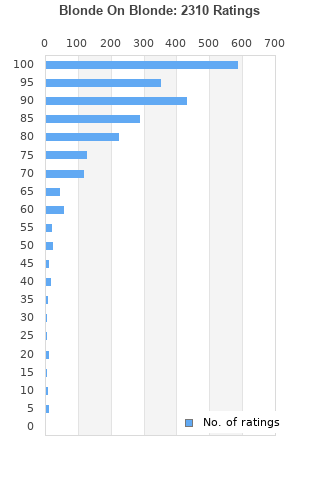 Blonde On Blonde is ranked 2nd best out of 74 albums by Bob Dylan on BestEverAlbums.com.

The best album by Bob Dylan is Highway 61 Revisited which is ranked number 26 in the list of all-time albums with a total rank score of 35,893. 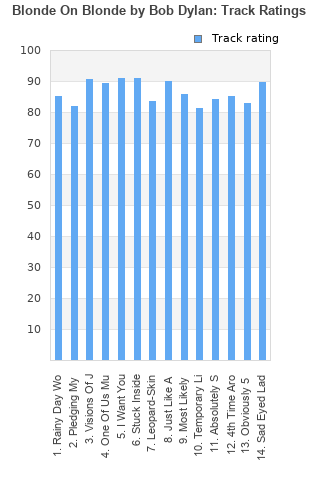 Stuck Inside Of Mobile With The Memphis Blues Again
Rating: 91 (558 votes)Comments:

Rating metrics: Outliers can be removed when calculating a mean average to dampen the effects of ratings outside the normal distribution. This figure is provided as the trimmed mean. A high standard deviation can be legitimate, but can sometimes indicate 'gaming' is occurring. Consider a simplified example* of an item receiving ratings of 100, 50, & 0. The mean average rating would be 50. However, ratings of 55, 50 & 45 could also result in the same average. The second average might be more trusted because there is more consensus around a particular rating (a lower deviation).
(*In practice, some albums can have several thousand ratings)
This album is rated in the top 1% of all albums on BestEverAlbums.com. This album has a Bayesian average rating of 87.8/100, a mean average of 86.4/100, and a trimmed mean (excluding outliers) of 87.9/100. The standard deviation for this album is 15.1.

I really like Bob Dylan but only been working through his extensive discography and still hardly even made a dent after 15 albums! I do enjoy this album - some great tracks include I Want You, Just Like A Woman and the opener - Rainy Day Woman. But the album is quite patchy for me.

Blonde on Blonde marks the end of a monumental trilogy from Bob Dylan and he does it in style. For me this is the highlight of the three with an album that showcases all o the different sides of Dylan's incredible repertoire.

This one is very good leg to leg with Bringing It All Back Home and the only better one is Highway 61 Revisited. It is a long listen but worthy.

There is a lot to unpack here, almost like a stream of consciousness pouring out of Dylan's head. It's possibly the most accessible that Dylan gets, actually.

Mejores canciones: Visions of Johana, Igual want You, Stuck inside..., One of us must know, sad eyed...

I never expected this album to be so good once I first heard it this year, and wow it is amazing. First, listen I instantly saw it catchiness and really loved multiple listens on this.

Probably the dictionary of Bob Dylan's brain into an epic double album, aka his scrap book of ideas. Nonetheless his double masterpiece.

Your feedback for Blonde On Blonde