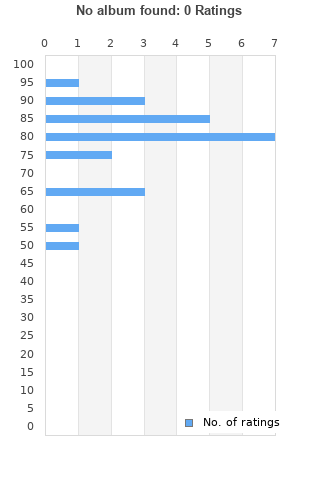 Græ is ranked 2nd best out of 5 albums by Moses Sumney on BestEverAlbums.com. Rating metrics: Outliers can be removed when calculating a mean average to dampen the effects of ratings outside the normal distribution. This figure is provided as the trimmed mean. A high standard deviation can be legitimate, but can sometimes indicate 'gaming' is occurring. Consider a simplified example* of an item receiving ratings of 100, 50, & 0. The mean average rating would be 50. However, ratings of 55, 50 & 45 could also result in the same average. The second average might be more trusted because there is more consensus around a particular rating (a lower deviation).
(*In practice, some albums can have several thousand ratings)
This album is rated in the top 8% of all albums on BestEverAlbums.com. This album has a Bayesian average rating of 76.0/100, a mean average of 75.8/100, and a trimmed mean (excluding outliers) of 76.3/100. The standard deviation for this album is 13.8.

Moses has something really special and he’s insanely talented. I thoroughly enjoyed this album and its high points are true bliss. That being said I didn’t enjoy it nearly as much as Aromanticism, it just wasn’t up to the same standard as his debut. I really hope it’s another case of a sophomore slump because I really believe he has the potential to be one of the greatest artists of this new decade. Græ is a bit too self indulgent for my taste, it has a running theme of understanding, loving, and exalting yourself which is great but it’s not executed properly and at time is a bit precocious. I’m not a fan of the amount of interlude tracks here he has the potential to make really memorable songs but I didn’t see that here. It’s a good album definitely, but it didn’t measure up to the high bar he set for himself with his debut.

Clear display of a talent in an impressive but a bit unfocused project. The first part of the album is a bit formless for my liking but I found the second part very enjoyable. My mind draws comparisons to Jeff Buckley towards the end of the album. Too much interlude for me.

This is the only album since 2016 which, I would say, comes close to Frank Ocean's Blond in terms of.. Blond was so original, and it felt like such a once in a blue moon release that I didn't think I would get another album that sounded as unique. But Moses Sumney has actually made a spectacular album that is just as original in its own way and deserves to be explored with the same intensity.

I was a big fan of Aromanticism, and Grae is a very ambitious leap from that, but goddamn he stuck the landing.

It's a little overwhelming at first, but this is one that's gonna grow into a classic. We're not giving it nearly enough attention. It's a little fragmented at first glance, but the more time you spend with it, the clearer it becomes as a whole. Anyway, grae rules. I hope we all come to love it.

This album demands time and attention, but my goodness it rewards it. Some songs initially sound like aimless wailing and take time to reveal their melodies, but when they do they're absolutely gorgeous. Indeed the whole album is transcendent. The person who described it as sounding like Coldplay, possibly because Moses sings in a high register, needs to get his ears checked. Just ridiculous.

Seems to have a Chris Martin-esque need to be singing at all times. No space for the music to breathe. It comes across as a very self-indulgent project, not least by the sheer number of songs.

Wow, this album is incredible. Moses Sumney has only proved again that he is at the forefront of innovation in music. His songs and production are truly mind-blowing. This album deserves all the hype.