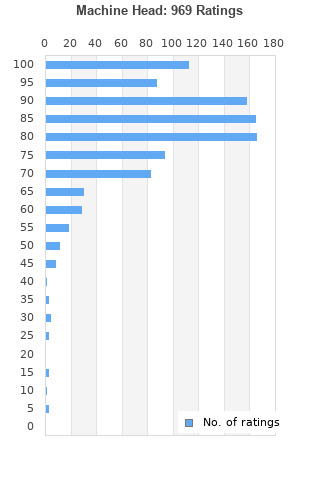 DEEP PURPLE ~ MACHINE HEAD LP (1973) RARE CLUB EDITION R113813 BS 2607 + POSTER
Condition: Used
Time left: 1h 14m 37s
Ships to: Worldwide
$25.00
Go to store
Product prices and availability are accurate as of the date indicated and are subject to change. Any price and availability information displayed on the linked website at the time of purchase will apply to the purchase of this product.  See full search results on eBay

Machine Head is ranked as the best album by Deep Purple. 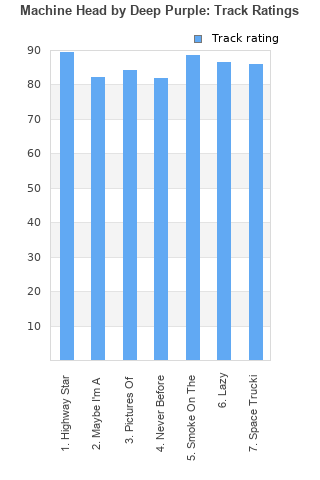 Rating metrics: Outliers can be removed when calculating a mean average to dampen the effects of ratings outside the normal distribution. This figure is provided as the trimmed mean. A high standard deviation can be legitimate, but can sometimes indicate 'gaming' is occurring. Consider a simplified example* of an item receiving ratings of 100, 50, & 0. The mean average rating would be 50. However, ratings of 55, 50 & 45 could also result in the same average. The second average might be more trusted because there is more consensus around a particular rating (a lower deviation).
(*In practice, some albums can have several thousand ratings)
This album is rated in the top 1% of all albums on BestEverAlbums.com. This album has a Bayesian average rating of 82.5/100, a mean average of 81.7/100, and a trimmed mean (excluding outliers) of 82.6/100. The standard deviation for this album is 13.8.

one of my earliest purchases still excellent overall these years guitar, keyboards vocals the complete package.

So many iconic tunes, as classic as it gets.

Amazing instrumentation throughout! Highway Star is amongst my favorite guitar solos of all time. Pictures of Home and Lazy were also highlights for me. I have mixed feelings about Ian's vocals (a bit too....arena rock maybe on a couple of tracks?) and some of the lyrics here are uninspired.

A good album filled with hits, Pitcure of home, highway stars and space truckin' are my favs.

This album was recorded at the peak of the Mark II lineup. A milestone in early hard rock music. No weak tracks but the best versions (at least four out of seven tracks) can be found on the live album Made In Japan.

The one album of the Holy Trinity say all i think. Best songs: Smoke On The Water a classical standard, Highway Star, Lazy.

Purples best album, no weak tracks. We're all bored with Smoke on the Water (aren't we?) but no-one can deny that it's got one of the most memorable guitar riffs ever. My favourite track is Pictures of Home, which never gets boring no matter how many times I hear it. In my top 100. There are great tracks on other Purple albums, but this is the most consistent.

Oh yeah, this is foreboding for '80s metal. But honestly, so is Led Zeppelin's "Communication Breakdown", and I constantly get the feeling that I'm listening to it. It contains the endlessly wandering guitar solos so well-known from '80s metal, and just like in the '80s they're not much fun, but they're not completely dull.

Awesome hard rock album! Standouts are Highway Star, Smoke On The Water, and Lazy. Pictures Of Home, Never Before, Space Truckin', and When A Blind Man Cries (on the re-release) are also really good.

Your feedback for Machine Head