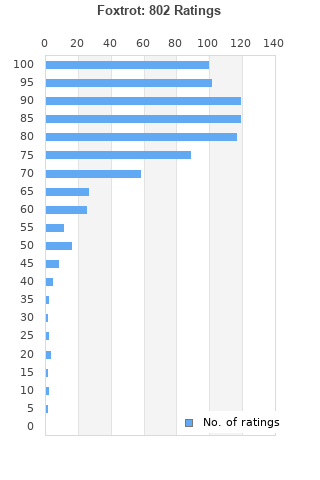 Foxtrot is ranked 3rd best out of 33 albums by Genesis on BestEverAlbums.com.

The best album by Genesis is Selling England By The Pound which is ranked number 129 in the list of all-time albums with a total rank score of 12,935. 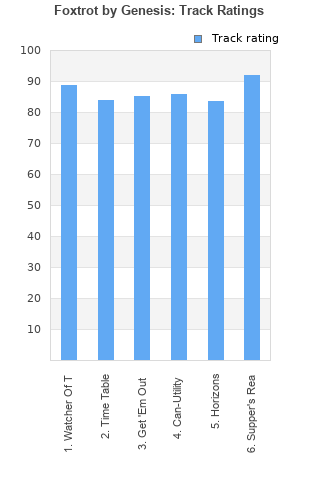 Rating metrics: Outliers can be removed when calculating a mean average to dampen the effects of ratings outside the normal distribution. This figure is provided as the trimmed mean. A high standard deviation can be legitimate, but can sometimes indicate 'gaming' is occurring. Consider a simplified example* of an item receiving ratings of 100, 50, & 0. The mean average rating would be 50. However, ratings of 55, 50 & 45 could also result in the same average. The second average might be more trusted because there is more consensus around a particular rating (a lower deviation).
(*In practice, some albums can have several thousand ratings)
This album is rated in the top 1% of all albums on BestEverAlbums.com. This album has a Bayesian average rating of 82.7/100, a mean average of 81.8/100, and a trimmed mean (excluding outliers) of 82.8/100. The standard deviation for this album is 15.0.

This album is a display of musical greatness by a group that is at the peak of its powers. This is evidenced best on 23 minute epic that is Supper's Ready. This song just astounds me every time I listen to it and it elevates an already fantastic album even higher. The progression on that song is simply genius and everything just seems to culminate into this creation of pure perfection. The rest of the songs while being a little step down from this are still outstanding other than Time Table which does feel a little out of place for me but it doesn't take you out of the music. Instrumentally, this release is a marvel with the performances we are treated to being nothing short of beautiful. While every instrument plays its part if I was to pick the highlights for me they would be the guitars, percussion, flute and pianos. The solos are phenomenal and even though the music is so diverse in terms of instruments every single one is allowed to shine and all add up to create a brilliant atmosphere and a deeply rich soundscape. Then you add the vocals and lyrics on top which are just the icing on the cake. Overall, this album is a must listen for any fan of music and really set Genesis aside as one of the kings of prog rock.

Amazing album, instrumental is really good and great voice over it. Supper's Ready sounds beautiful throughout all 23 minutes. But the other tracks are great as well.

This is an important album for Genesis and for prog. Genesis pushed the envelope and they did it boldly.

They don't touch me as other acts do, like Yes, King Crimson or Pink Floyd.

This is a masterful album nonetheless.

The two songs bookending this album are reason enough to buy this prog classic. In my view there isn't a lot between this album and Selling England by the Pound. I was never lucky enough to see Genesis live in their heyday but I have seen Steve Hackett and his band perform Watcher of the Skies on two occasions and it was superb on both occasions!

A triumph of production both in the sound surface sense and in a put-togetherness sense. Supper's Ready is such a fun whimsical majestic concoction to listen to (a thoroughly planned and flawlessly executed one, of course). Get 'Em Out By Friday starts well but goes on for too long. Horizons is a wonderful little rest stop.

This album isn't just Supper's Ready. The opening track is full on with a fantastic introduction. Time Table is a beautiful song. The only track I don't really like is Get 'Em Out By Friday, I've never really taken to it. Coastliners is up there as one of the best Genesis tracks. Horizons beautifully showcases Steve's talent. As for Supper's Ready, well it deserves all of the plaudits. For me and without doubt it is the best piece of music ever written by a rock band. It is my favourite track. The musical pieces within it are truly astounding.

This is their best work overall. It's a little underrated, and I get it, it's only 6 songs. But Supper's Ready is truly superior: the best prog rock song ever I would say. Watcher of the Skies is specially good, and Get 'Em Out by Friday also superb. Time Table and Can-Utility and the Coastliners aren't my favorites, nor is Horizons, but they compliment the album well enough.

Supper's ready is an artistic statement by itself. It feels like the rest just paves the way, but there are plenty more moments of greatness here.

The album that proved that Genesis would be prog masters. Everything gels together so well here. There's hardly a moment where you're uninterested. Watcher of the Skies is a perfect opener and a contender for Genesis' best song, and of course Supper's Ready is fantastic as well. Get 'Em Out by Friday is an underrated gem that's more than worth your time. Those three are essential, everything else is strongly recommended. Perhaps even more importantly, Foxtrot began a four-album run that remains unmatched in true progressive rock (unless you count Pink Floyd's Dark Side-WYWH-Animals-The Wall as true prog).

Your feedback for Foxtrot