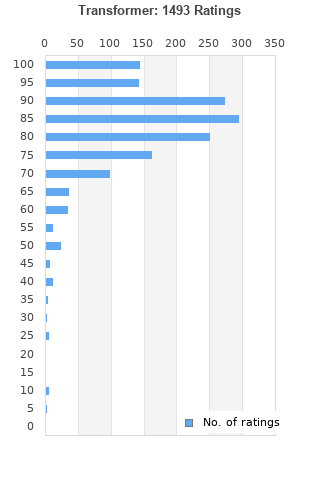 Transformer is ranked as the best album by Lou Reed. 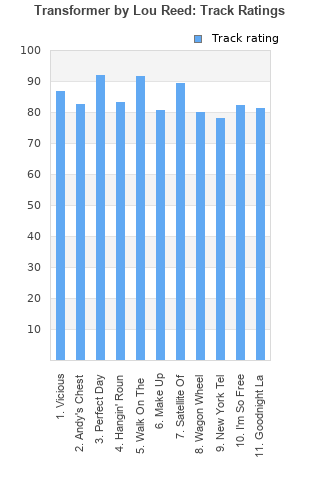 Rating metrics: Outliers can be removed when calculating a mean average to dampen the effects of ratings outside the normal distribution. This figure is provided as the trimmed mean. A high standard deviation can be legitimate, but can sometimes indicate 'gaming' is occurring. Consider a simplified example* of an item receiving ratings of 100, 50, & 0. The mean average rating would be 50. However, ratings of 55, 50 & 45 could also result in the same average. The second average might be more trusted because there is more consensus around a particular rating (a lower deviation).
(*In practice, some albums can have several thousand ratings)
This album is rated in the top 1% of all albums on BestEverAlbums.com. This album has a Bayesian average rating of 83.3/100, a mean average of 82.5/100, and a trimmed mean (excluding outliers) of 83.4/100. The standard deviation for this album is 12.8.

Massive Lou Reed album which introduced him to many people with the big hit "Walk on the Wild Side". Lots of variety here and Perfect Day is also a classic.

Fantastic production on this one. Oerfect Day is wonderful abd Walk On The Wild Side has an amazing tune, Satellite Of Love is really good too. Experimental and catchy at the same time.

Lou Reeds best album for me. Really well produced by David Bowie. All tracks are very good, with a few standout perfect songs like perfect day, walk on the wildside and satellite of love. Some funny wacky songs which are still a great listen thanks to great production.

see what sticks to the wall not much. exception the magnificent Walk on the Wild side

Good album, but with a bit of a lacking ending.

There's always been something of the urban hipster in Lou Reed's aesthetic, and as a result I've always felt there was something about his musical style that misaligns with my tastes. That said, I've always found a way to like him nonetheless. I first came to appreciate him in high school when I first heard his aptly named live album Rock 'n' Roll Animal, but it's Transformer that has emerged as my favorite Lou Reed album. The great "Walk on the Wild Side" is here, of course, but for me it's songs such "Satellite of Love" and "Perfect Day" that beautifully encapsulate Lou Reed's gifts as a lyricist as well as his skill as a musical artist. That "Satellite of Love" has been covered by a bunch as eclectic as Morrissey, U2, Porno for Pyros, Leo Sayer, and Milla Jovovich is testimony to its wide-ranging influence.

Good album favorite and loveable songs are: Walk On The Wild Side, Andy´s Chest, Vicious, Satellite of Love.

I like the bass in Walk On The Wild Side. Very good arrangement and perfect singer.

Your feedback for Transformer