Exile On Main St. (studio album) by The Rolling Stones 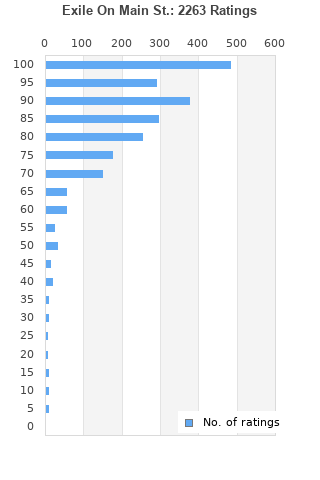 Exile On Main St. is ranked as the best album by The Rolling Stones. 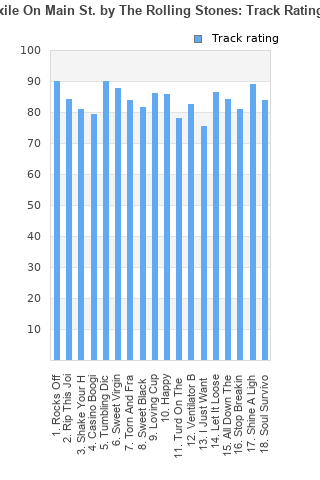 Rating metrics: Outliers can be removed when calculating a mean average to dampen the effects of ratings outside the normal distribution. This figure is provided as the trimmed mean. A high standard deviation can be legitimate, but can sometimes indicate 'gaming' is occurring. Consider a simplified example* of an item receiving ratings of 100, 50, & 0. The mean average rating would be 50. However, ratings of 55, 50 & 45 could also result in the same average. The second average might be more trusted because there is more consensus around a particular rating (a lower deviation).
(*In practice, some albums can have several thousand ratings)
This album is rated in the top 1% of all albums on BestEverAlbums.com. This album has a Bayesian average rating of 85.5/100, a mean average of 84.2/100, and a trimmed mean (excluding outliers) of 85.6/100. The standard deviation for this album is 16.1.

Overall, as an album, the best Stones album.
Not the biggest "radio hits", but not one bad song. Ok "I Just want to see his face" is not their greatest song ...
If i had to pick one Stones record to listen for the rest of my days, it would be this one.

I can't really find why people think this is the best Stones album, some good songs on here, but songs like Sweet Virginia, Turd on the run, Sweet black angel just are not good. I Also think Let it Bleed and Sticky Fingers are better, due to the variation on these albums, not just 1 genre. Still good, but 3. best from Stones for me

Absolutely classic stones album. Every track works together with the rest. They are all unique but all work together. And an interesting back story about the making of it. Love it.

Definitely best, most consistent Stones effort and only Sticky Fingers comes close. They do here what is hard to do, they maintain to entertain you through the over hour of listening with no bad tracks. There isn't one obvious highlight on here like Gimme Shelter (Let It Bleed) or Paint It Black (Aftermath) but all of the tracks make this album collectively great. Even as not the biggest Stones fan I have to admit this is very good album.

This is an album that it's harder to not enjoy than enjoy. Basically, it has something for everyone and makes you feel good.

Justifiably considered their masterpiece. Best tracks: "Rocks Off," "Tumbling Dice," "Happy," and "Shine a Light." I'm not a huge stones fan but I appreciate what they did between 68-72 and how influential that was on the course of rock afterwards. Exile was the culmination of that period and my favorite album to listen to from beginning to end.

Your feedback for Exile On Main St.