Thick As A Brick (studio album) by Jethro Tull 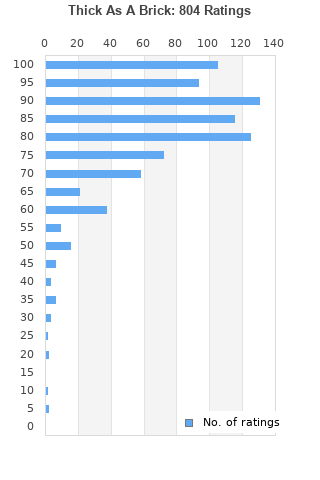 Thick As A Brick is ranked as the best album by Jethro Tull. 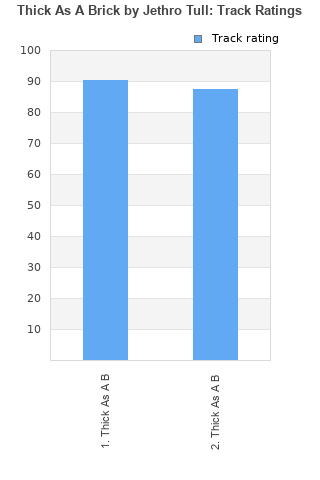 Thick As A Brick rankings

Thick As A Brick collection

Thick As A Brick ratings

Rating metrics: Outliers can be removed when calculating a mean average to dampen the effects of ratings outside the normal distribution. This figure is provided as the trimmed mean. A high standard deviation can be legitimate, but can sometimes indicate 'gaming' is occurring. Consider a simplified example* of an item receiving ratings of 100, 50, & 0. The mean average rating would be 50. However, ratings of 55, 50 & 45 could also result in the same average. The second average might be more trusted because there is more consensus around a particular rating (a lower deviation).
(*In practice, some albums can have several thousand ratings)
This album is rated in the top 1% of all albums on BestEverAlbums.com. This album has a Bayesian average rating of 82.9/100, a mean average of 82.1/100, and a trimmed mean (excluding outliers) of 83.0/100. The standard deviation for this album is 14.8.

Thick As A Brick favourites

Thick As A Brick comments

Great long prog rock album, I like it very much. Over 40 minutes of amazing music, first part slightly better than second but they're great as a whole.

I love the energy and the musicality of this record. This album is fun!

Regarded as one of the highlights of prog, I agree this is a landmark album.

When it comes to prog I’m one of those take it or mostly leave it music fans but this one really surprised how much I enjoyed the entire experience. The quality and complexity of the instrumentation is
P-H-E-N-O-M-E-N-A-L especially the keyboards as highlighted on the “Legends Believe in the Day” section

OK, so the Monty Python styled concept album “spoof” falls a little flat but man is this a good album. If you are yet to check it out I simply can’t recommend this album more highly

Incredible concept. Just one epic song or like a record without songs just the story and seamless music if you like.
Great variety of folk, prog and rock.

I find this an easier listen than Aqualung and it rocks, possibly more than any of his other albums. The mother of all concept albums and as intended unlike Aqualung which the band claim wasn't... The concept itself is clever and worthy of ten points!

Ian Anderson switched drummer for this album and the rhythm section really comes to life in a way not heard on the previous four albums.

A truly great album, full of quirky, changing melodies...I never tire of listening to this album....

Underappricated greatness! Not to mention the coolest cover in vinyl history!

really good disc, a lot of creativity went into this record indeed

Your feedback for Thick As A Brick