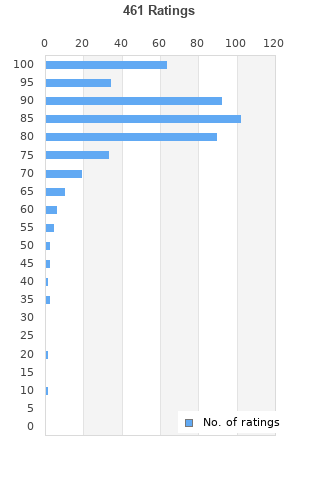 The Sidewinder Sleeps Tonite appears on the following album(s) by R.E.M.:

R.E.M. – The Sidewinder Sleeps Tonite. Warner Bros. W0152C Tape Cassette Single
Condition: Very Good
Time left: 1d 22h 50m 37s
Ships to: Worldwide
£7.59
Go to store
Product prices and availability are accurate as of the date indicated and are subject to change. Any price and availability information displayed on the linked website at the time of purchase will apply to the purchase of this product.  See full search results on eBay

Rating metrics: Outliers can be removed when calculating a mean average to dampen the effects of ratings outside the normal distribution. This figure is provided as the trimmed mean. A high standard deviation can be legitimate, but can sometimes indicate 'gaming' is occurring. Consider a simplified example* of an item receiving ratings of 100, 50, & 0. The mean average rating would be 50. However, ratings of 55, 50 & 45 could also result in the same average. The second average might be more trusted because there is more consensus around a particular rating (a lower deviation).
(*In practice, some tracks can have several thousand ratings)
This track is rated in the top 2% of all tracks on BestEverAlbums.com. This track has a Bayesian average rating of 85.3/100, a mean average of 84.7/100, and a trimmed mean (excluding outliers) of 85.5/100. The standard deviation for this track is 11.5.

Really nice song but it gives me problems.

For the first half of the song I have the Lion Sleeps Tonight buzzing around my head and then I'm mishearing 'calling Jamaica' instead of 'call me when you try to wake her up'. I know its ridiculous but there it is.

It's also too long especially the repetitive chorus line. If only Jamaica had answered his bloody call sooner.

Amazing song. I love when Stipe laughs at his inability to pronounce Dr. Seuss's name correctly.

Good song, but a break in tone in the album. May have worked better if it was released separately?

This song just makes me so damn happy

And one day, I will be able to sing the correct words to that chorus.

The song that just makes you feel like everything is going to be alright :)

Your feedback for The Sidewinder Sleeps Tonite