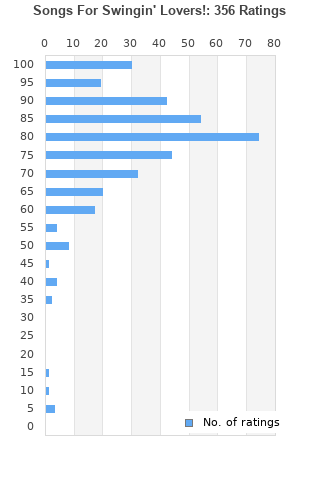 Songs For Swingin' Lovers! is ranked 2nd best out of 97 albums by Frank Sinatra on BestEverAlbums.com.

The best album by Frank Sinatra is In The Wee Small Hours which is ranked number 391 in the list of all-time albums with a total rank score of 4,895. 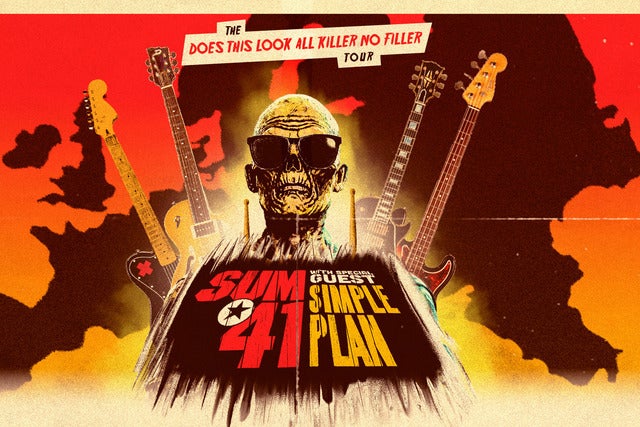 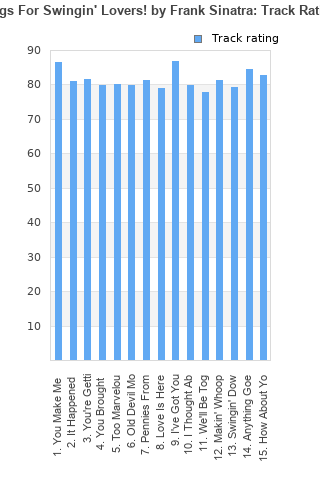 Rating metrics: Outliers can be removed when calculating a mean average to dampen the effects of ratings outside the normal distribution. This figure is provided as the trimmed mean. A high standard deviation can be legitimate, but can sometimes indicate 'gaming' is occurring. Consider a simplified example* of an item receiving ratings of 100, 50, & 0. The mean average rating would be 50. However, ratings of 55, 50 & 45 could also result in the same average. The second average might be more trusted because there is more consensus around a particular rating (a lower deviation).
(*In practice, some albums can have several thousand ratings)
This album is rated in the top 2% of all albums on BestEverAlbums.com. This album has a Bayesian average rating of 78.9/100, a mean average of 78.1/100, and a trimmed mean (excluding outliers) of 79.1/100. The standard deviation for this album is 15.5.

Think Untitled summarises it well.
You Make Me Feel So Young; Pennies From Heaven and I've Got You Under My Skin - well known and probably the standout tracks here

This is the music people hear when anyone mentions the name Frank Sinatra and that is because this is him at his best. He is both melancholy yet upbeat and the album balances out very well. The album is dominated by his voice which can sway the emotion in a room in a second. The control Sinatra has over his voice is nothing short of mesmerising and I think he displays that best on here. Every song suits the mood and style of the album and the tracks flow from one to the next very smoothly. Then there are the huge hits on here which are brilliant. There are some filler and like most records in the 50's it is repetitive by the end. Also, it is dull in spells and some songs could do with a little more flare as well as the record is in need of shortening as it is bloated. Overall, this is Sinatra at his peak on an album as it is just so enjoyable.

This is THE album people think of when they think of Sinatra. In my opinion, it's not his best work per se, but the greatness lives on.

Favoritas: I've Got You Under My Skin, You Make Me Feel So Young,
You're Getting To Be A Habit With Me, Anything Goes

The most perfect album of swing in the history! Masterpiece. Sinatra and Riddle are perfect!

The first great album of popular music is still arguably the best. 45 minutes of effortless pop perfection. Impossible to pick a track out as there all are peerless. Until today there were 4 albums I thought were basically perfect; kind of blue, the white album, london calling and blonde on blonde. Now I have a fifth!

A great album by the greatest singer. I love the fireworky brass in IGYUMS. Peerless!

Your feedback for Songs For Swingin' Lovers!