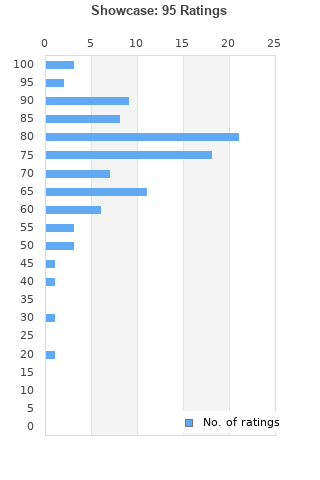 Showcase is ranked as the best album by Patsy Cline. 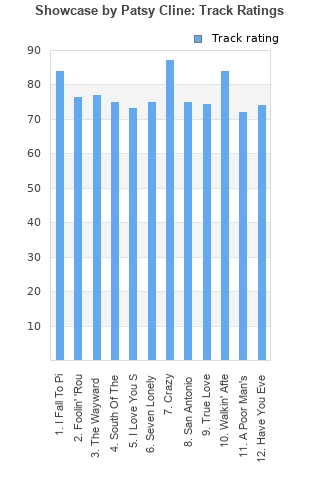 Rating metrics: Outliers can be removed when calculating a mean average to dampen the effects of ratings outside the normal distribution. This figure is provided as the trimmed mean. A high standard deviation can be legitimate, but can sometimes indicate 'gaming' is occurring. Consider a simplified example* of an item receiving ratings of 100, 50, & 0. The mean average rating would be 50. However, ratings of 55, 50 & 45 could also result in the same average. The second average might be more trusted because there is more consensus around a particular rating (a lower deviation).
(*In practice, some albums can have several thousand ratings)
This album is rated in the top 10% of all albums on BestEverAlbums.com. This album has a Bayesian average rating of 75.4/100, a mean average of 74.6/100, and a trimmed mean (excluding outliers) of 75.7/100. The standard deviation for this album is 13.8.

Just an overall really enjoyable album that happens to have one of the all time greatest country songs ever written.

An absolute classic and a blueprint for pop-crossover country.

A Side: I Fall to Pieces
B Side: Crazy

Best tracks: I Fall to Pieces, Crazy
Worst tracks: I Love You So Much It Hurts, Seven Lonely Days

A great release by one of country music's greatest voices!

Patsy Cline, like Judy Garland and Billie Holiday, was taken far too soon. Proof of that statement is layered across this album. I'm not the biggest fan of 60's country, but there's no denying Patsy's vocal gift. The voice of an angel, truly.

This record has some true classic's on it. It does contain some filler material but Patsy puts her all into them anyway. A country superstar if there ever was one.

"Seven Lonely Days", "Crazy" and "Walkin' After Midnight" are superb. The rest of the album holds up okay.

Patsy Cline is the definition of female country music. Her voice exudes such emotion - only Billie Holiday can tear your heart apart to the same degree. Without this woman country would have stalled in the 60s, and been dominated by men. No other female artist has topped her in the whole genre. The girls today could learn so much from this pearl.

Your feedback for Showcase