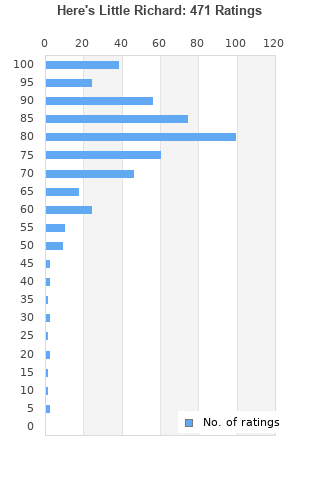 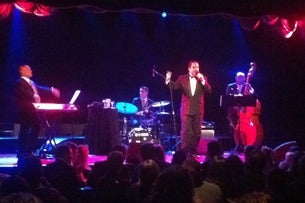 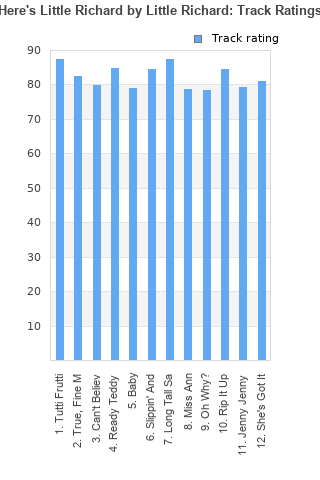 Rating metrics: Outliers can be removed when calculating a mean average to dampen the effects of ratings outside the normal distribution. This figure is provided as the trimmed mean. A high standard deviation can be legitimate, but can sometimes indicate 'gaming' is occurring. Consider a simplified example* of an item receiving ratings of 100, 50, & 0. The mean average rating would be 50. However, ratings of 55, 50 & 45 could also result in the same average. The second average might be more trusted because there is more consensus around a particular rating (a lower deviation).
(*In practice, some albums can have several thousand ratings)
This album is rated in the top 2% of all albums on BestEverAlbums.com. This album has a Bayesian average rating of 79.3/100, a mean average of 78.2/100, and a trimmed mean (excluding outliers) of 79.4/100. The standard deviation for this album is 15.0.

This really could be a greatest hits album as it is non stop energy right from the first track and it never slows down for the full run time. It really is the definition of rock and roll and the influence this record has had is probably too big to even measure. The simple melodies hook you in and the fantastic instrumentals maintain your interest allowing you to listen to this album endless times before getting even the slightest bit bored. The solos we are treated to are fantastic as well and demonstrate the music as more complex than some people give it credit for. Then there is the vocal which is one of the greatest singing voices we have ever been graced with. It is instantly recognisable and dominates songs making them his own and making every other version of these tracks inferior. Every track is fantastic as well and I really do think there is no weak cuts on here. Overall, this is a masterpiece of rock and roll music and is both one of the greatest performances put on to a record and one of the most important albums that has ever been released.

Energy is here, but songs are too repetitive, still iconic record.

Was anybody REALLY ready for what Little Richard dropped in 57? This is so far ahead of its time, and shaped so much of what was to come.

Incredibly this debut album from Rock n Pioneer Little Richard released in 1957 would be his biggest hit and highest charting album. More a Greatest Hits package than actual album

I like to compare this to Berry On Top. One of the best of its decade but just the blues to dance to so it doesn't make my top 100. That being said, I freaking love this.

My favourite of the rock and rollers. Has to be one of the most intense performers up to this point for sure.

Such a fabulous record by the equally fabulous Little Richard. One of Rock N' Roll's greatest moments here. 'Tutti Frutti', 'Ready Teddy', 'Slippin and Slidin', 'Long Tall Sally' and 'Rip It Up'! How could you go wrong with a miriad of classics like that. A truly great rock n' roll record.

Obviously heard some of his stuff over the years but this is the first album of his I have owned and listened to right through. The sound quality isn't great but that can't disguise some great tracks. A couple I had to double check it was him singing as I actually thought it was a female singer!
Great album with standout tracks for me including Can't Believe You Wanna Leave, Oh Why? and She's Got it

Your feedback for Here's Little Richard